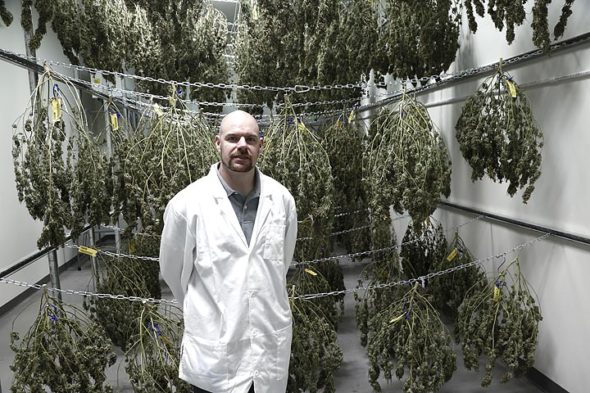 Last week, Dennis Plamondon, director of cultivation at Cresco Labs in Yellow Springs, stood before some of the first crop of cannabis harvested a few days before Christmas. The plants will dry before they are “deboned,” packaged and sold as flowers to dispensaries around the state. Medical marijuana has yet to hit the shelves as several aspects of Ohio’s program are not yet fully operational. (Photo by Gary McBride)

The inaugural harvest of close to 400 cannabis plants was completed a few days before Christmas at Cresco Labs in Yellow Springs, and its medical marijuana products will soon be available to dispensaries around the state.

Delays in state licensing for several aspects of the process pushed back the initial rollout of Ohio’s medical marijuana program from last fall to early 2019. But Cresco is looking forward to soon reaching medical marijuana patients with medicine, according to Director of Cultivation Dennis Plamondon in a recent interview.

“These products should be coming out any day now,” Plamondon said. “That’s the next big step. That’s what all this hard work has been leading up to — getting this product available.”

As Cresco awaits lab results from a certified testing laboratory, which should be “any day now,” in Plamondon’s words, the harvest is currently being dried, “deboned” and prepared for sale. In Ohio, there are 56 dispensaries being initially licensed, and most of them will carry Cresco products.

“We have customers ready to buy,” Plamondon said. “As soon as we get the lab results, we’ll be ready to ship product out.”

According to Plamondon, certified testing labs measure the levels of CBD, THC and other factors relevant to prescribing dosages of the various forms of the product. The labs will also check for pesticides, heavy metals and impurities.

The certification of testing labs has been one of several bottlenecks holding up the implementation of the state’s medical marijuana program that was approved by the state Legislature more than two-and-a-half years ago. But in recent weeks, two testing labs in the state were certified, although a nearby lab at Central State University has not yet been given final approval.

Cresco’s Yellow Springs facility is one of 25 large-scale cultivators in the state. The company, based in Chicago and operating in six states, also owns a dispensary in Wintersille, near Steubenville in eastern Ohio.

However, because Cresco has yet to receive its processing license, the company will sell as its first product what the industry calls “flower,” which is administered with a vaporization device, according to Plamondon. Once the processing license is in hand, Cresco will also produce transdermal patches, capsules, tinctures, sprays and edibles in Yellow Springs.

Currently, 25 employees work at the local facility, which Plamondon said is “about halfway to full staff.”

“We have a lot of different areas to build out still,” he said. While the facility has been mostly limited to a cultivation crew so far, other aspects of the operation — logistics, delivery to dispensaries, packaging and more, are still to be staffed, Plamondon said.

Cresco is one of the first cultivators to harvest a crop of cannabis in the state. But as more companies bring their products to market, soon state dispensaries will be able to fill their shelves.

“Weight will be limited at first, since we can only [harvest] so much at a time, but as more and more production facilities get their harvest down, there will be more products available,” Plamondon said.

The plants, which originate as “clone” cuttings, take about four months to reach maturity, Plamondon explained. At Cresco, a continual cycle of production has begun.

“We’ll be [harvesting] every two weeks, so we’re on a perpetual harvest cycle,” he said.

Plamondon came to Cresco’s Yellow Springs lab from Colorado about six months ago. Plamondon, who has been licensed in the industry for about a decade, is motivated by the relief that medical marijuana can provide those suffering from a variety of health problems.

“This helps people. It gives them relief they’ve been searching for,” Plamondon said.

Plamandon is proud of his previous work for a company that developed the cannabis strain Charlotte’s Web. Considered a groundbreaking strain, Charlotte’s Web has a very high level of beneficial CBD, but extremely low THC, so it causes virtually no psychoactive effects. It has been used to treat epileptic seizures, PTSD and a variety of other medical conditions, according to the industry website, coloradopotguide.com. Charlotte’s Web is named for a girl who was suffering hundreds of violent epileptic seizures each week. Since using the CBD oil version of the strain, she now only has a few mild seizures each month, according to the site.

Seeing the impact of that strain drove Plamandon to commit to the industry.

“When I saw the relief and quality of life it gave those kids having seizures, this was something I wanted to do as a career — to make this plant accessible to as many people who can use it as possible,” Plamandon said.

Charlotte’s Web is limited in its availability outside of Colorado, but locally Cresco will produce more than 25 varieties of medical marijuana, giving a “range of options for different remedies,” in Plamondon’s words.

“Our products are tailored to people that are new to experiencing this, so it tells them what kind is good for what things,” Plamandon said.

The names are generalizations, since everybody responds differently to cannabinoids, but they give new patients a starting point to see what works for them, Plamandon explained.

“We have lots of information online to educate people who are trying to seek relief for the first time — what strains help with what condition, what the benefits are,” he said.

Some of the strains Cresco grows retain names that long ago were given to recreational varieties, such as Alien Duchess, Lime Skunk, Punkxsy Punch, Katsu Bubba Kush and Pineapple Express. Despite these far-out monikers, the staff at Cresco treat their products seriously.

“We take the approach that this is a medicine,” Plamandon said.

Plamandon is grateful to Yellow Springs “for being so welcoming to us,” he added, and looks forward to his product making a difference in people’s lives.

“We’re ready to get this product out to the patients of Ohio.”

To purchase cannabis products, patients will need to be recommended for a card by a state-certified medical practitioner to treat one or more of 21 qualifying conditions. For more information visit medicalmarijuana.ohio.gov.