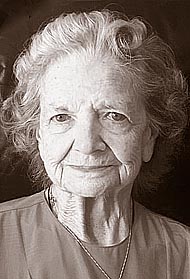 Anna Faye was born Dec. 13, 1929, near Sandy Hook, Ky., the daughter of Alvin and Vesta Lou (Carter) Caudill. She had several jobs after arriving in Springfield, including working as a nurse’s aide at the tuberculosis sanitarium. She later spent the majority of her life as a mother and homemaker. She enjoyed spending time outdoors tending to her garden and flowers, and observing the wildlife that visited her home.

She was preceded in death by her parents; her husband, Gilbert Yoakum Jr.; and siblings, Alice, Ilene, Willie, Ersel, Lonnie, Rudolph, Virgil, Luther and, most recently, Carrie.

Visitation was held Wednesday, March 6, at Richards, Raff and Dunbar Memorial Home. A service to honor Anna Faye’s life will be held Thursday, March 7, at 1 p.m., in the memorial home, with burial to follow in Rose Hill Burial Park. Expressions of sympathy may be made at http://www.richardsraffanddunbar.com.