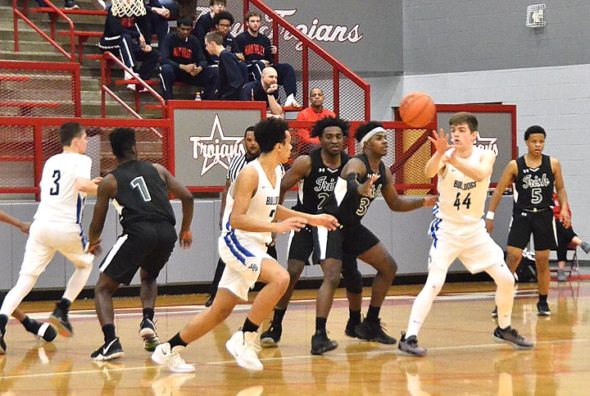 On Wednesday, Feb. 27, the boys varsity Bulldogs traveled to Troy High School to take on Springfield Catholic Central in the team’s first postseason game. The Bulldogs started strong and held the Irish to a 5–5 tie for most of the first quarter. But despite the scoring efforts of Andrew Clark and DeAndre Cowen, who contributed 14 and 11 points respectively, and strong play from the entire team, the Catholic Central Irish pulled ahead in the second quarter and maintained an insurmountable lead for the rest of the game. “We were just a couple of plays from staying in that game — couple of made shots, couple of loose balls, couple of rebounds,” said Bulldogs head coach Bobby Crawford. But ultimately the YS boys came up short, losing to a strong Catholic Central team 53–33, and finishing their season. Right: Trey Anderson passes to an open Dmitri Wallace, while Andrew Clark evades the Catholic Central defense. (Photo by Eleanor Anderson)

Winter sports season has ended, and the district and individual teams celebrated their accomplishments Thursday evening, Feb. 28, at the high school.

• MBC Coach of the Year in Girls Swimming — Bradley Martin.

• Angie Smith — First Team District 15 and Runner Up Player of the Year.

• Tim Minnich — Runner Up Coach of the Year.