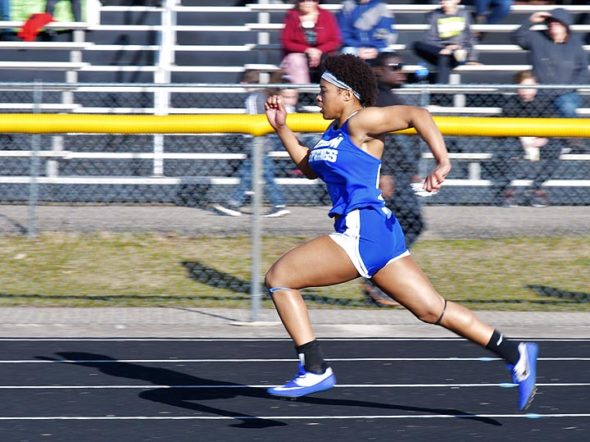 Annlynn Foster, above, and teammate Sophia Lawson were standouts Wednesday, March 27, when the Bulldogs opened their track season in a five-team meet at Springfield Shawnee. Both Foster and Lawson earned first-place finishes, with Foster in the 100 hurdles and Lawson in the pole vault. Both girls also were part of the first-place 400-meter relay team that included Malaya Booth and Haneefah Jones. (Photo by Kathleen Galarza)

Both the boys and girls track squads this spring boast the largest number of participants in several years — the boys squad has 21 athletes while the girls boast a robust squad of 17 participants. The girls team returns sophomores Haneefah Jones and Annlyn Foster, who both qualified for the regionals last year. In addition, one-time regional qualifier senior Jude Meekin returns for a final year, along with previous senior letter winners Kelli Baxter and Kayla Brown. Other returning letter winners are Lydia Fleetham, Ivy Tebbe and Ateerys Wagner. A bevy of newcomers are competing at the varsity level for the first time: Malaya Booth, Devyn Deal, Natalie Galarza, Sophia Lawson, Chanel Phillips, Talia Potter, Ani Reeder, Avery Reeder and Marin Wirrig.

With such large numbers, the Bulldogs will be able to field full teams and provide depth in a variety of events, which in previous years has been problematic. Coaching the Bulldogs this year are John Gudgel, Isabelle Dierauer and Peter Dierauer.  Former Bulldogs and YSHS alumni Devin Lewis, Ayanna Madison and Julie Roberts have also provided assistance.

On the boys side, with only 10 members competing out of a full squad of 21 due to spring break, Jay Millman admirably led the boys with a third-place finish in the 3,200 meters. Other significant performances were turned in by Sam Anderson, Phillip Diamond, Matt Duncan, Yanne Gilley, Liam Hackett, Vaughn Hendrickson, Jonah Kintner, Griffin Roberts and Calum Siler.

The Bulldogs are back in action April 4 with a return trip to Springfield Shawnee for the Seitz Invitational.