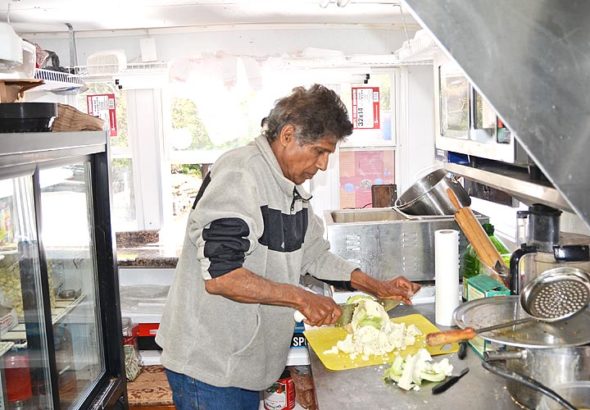 Aahar India reopened earlier this month, after closing for several months following a grease fire that severely damaged the local Indian food truck. Here, owner Akhilesh Nigam cuts cauliflower inside the new trailer he purchased and equipped, thanks in part to donations from customers and local businesses. (Photo by Audrey Hackett)

“I am very fortunate,” he said this week. “When the trailer burned down, I got lots of sympathy, lots of love, lots of affection from people in Yellow Springs.”

Aahar India, the local Indian food truck at 101 S. Walnut St., burned on Jan. 5 when flames from a grease fire engulfed a portion of the trailer. Nigam was physically unharmed, but his food truck was severely damaged by the blaze.

His insurance had lapsed just before the fire, and Nigam estimated the cost of a new trailer at $20,000 to $25,000. His wife suggested it might be time for Nigam to retire. But Nigam disagreed. 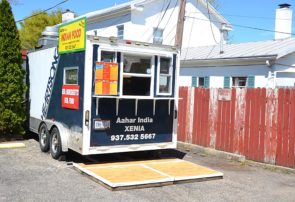 After his food trailer was destroyed by a fire in January, Akhilesh Nigam of Aahar India vowed to return. His new food trailer opened earlier this month. (Photo by Audrey Hackett)

Almost immediately, community members came forward with concern — and financial support. Four days after the fire, a customer set up a GoFundMe account to help Nigam raise funds for a new trailer. To date, the site has raised $2,535 from nearly 50 donors, including customers and numerous local businesses.

“After that I thought I must reopen,” Nigam said.

Another stroke of luck came when he discovered that as Aahar India is a sole proprietorship, his trailer was partially covered under his home insurance policy. While Nigam considered rebuilding the fire-damaged trailer, doing so was costly and would take time.

“I wanted to come back quickly — by spring,” he said.

Between the insurance payout and the GoFundMe donations, Nigam was able to purchase a new trailer and, with a helper, outfit it for his cooking needs. Features of the new space include a six-burner gas stove — Indian cooking requires the high heat of gas, he explained — and a large overhead exhaust hood.

“I couldn’t compromise with the hood,” he said. His previous trailer lacked a fire suppression system, a downside of older mobile food trailers, according to Miami Township Fire Chief Colin Altman in a previous News report.

The new trailer sits in Nigam’s old spot in the parking lot adjacent to the Corner Cone. The food truck passed its county health inspection on April 2, and Nigam reopened for business on Saturday, April 6. Customers have taken notice.

“The customers are all coming back,” he said with a smile.

As Nigam spoke with this reporter, one of his regulars stopped by. It was Monday, and Aahar India was closed.

“Oh no, I forgot,” the customer said, adding that she’d driven down from Springfield, but had no problem returning the next day for Nigam’s cooking.

Customers come from as far away as New York, Los Angeles and Washington state, stopping by when business or family brings them to the area, according to Nigam.

“My customers are my friends,” he said. “I don’t run my business with a yardstick” but with a looser, more flexible approach, he added. For example, he will suggest to regular customers that they get a different dish from the one they usually order — such as a savory pumpkin curry for the die-hard chicken fan.

“I want them to diversify,” he said. Nigam himself is vegetarian, but his menu features a number of chicken dishes as well as vegetarian specialties.

While cooking is a passion, Nigam, who is trained as an engineer, came to restaurant work via a circuitous route. He and his wife and then eight-month-old son came to this country from Lucknow, India, in 1995. They had just $100 between them. Within a couple of years, they had bought an Indian grocery in Beavercreek and expanded it into a restaurant. The restaurant did well until 9/11, after which business declined, according to Nigam. He and his wife, Pratibha, closed the business in 2005 and went to work for the GM plant in Moraine. When the plant closed in 2008, they reinvented themselves again, Pratibha earning her RN from Clark State Community College, and Nigam starting his food truck business in Yellow Springs. He has been here for nine years. The couple lives in Beavercreek Township, and their son, now 24, is training to be a doctor at the Ohio State University School of Medicine.

While some have suggested that he expand his trailer operation into a sit-down restaurant, Nigam loves what he calls the “freedom” of food truck life.

“I make the rules and I break them,” he said.

He can joke with customers and show his own personality more than if he had the cares of running a restaurant, he explained. In the food truck, he’s a solo operator — a solo act.

Now that Aahar India has reopened, the fragrance of pakora, chaat, kachori and other Indian delicacies once again wafts down Dayton and North Walnut streets six nights a week. The only remaining evidence of January’s fire is a smattering of tiny crushed pieces of glass mixed in with the pebbles on the pavement beside the trailer, which Nigam has been meticulously picking up by hand.

While he had it in the back of his mind to retire before the fire, Nigam said he’s now committed to staying with the business for at least a few more years.

Aahar India is open Tuesdays through Fridays, 4 to 9 p.m., and Saturdays and Sundays, noon to 9 p.m. It is closed on Mondays. Menu information can be found at the restaurant’s website, aaharindia.net, or on its Facebook page.