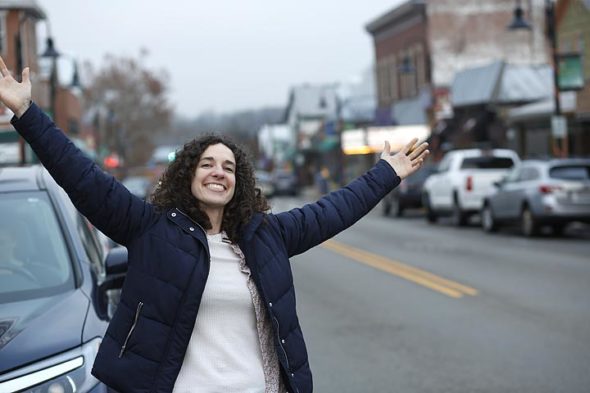 Musician Kyleen Downes on the streets of Yellow Springs, where she frequently performs and also hosts the weekly open mic night at Peach's. Downes will perform at the Yellow Cab Tavern in Dayton on April 14. (Photo by Gary McBride)

CORRECTION: This print version of this article included several misspelled names and gave an incorrect date for the Dayton BBQ Rodeo; these errors have been corrected in the web version of the story.

“Kyleen Downes is my friend.” More than just a T-shirt slogan, it’s an inevitable vibe that results from meeting the ebullient singer-songwriter or hearing her perform.

But yes, you can get the T-shirt, too.

The slogan references Downes’ most recent EP, 2018’s “Friends,” featuring several songs on the topic, which was recorded with her band.

In addition, her first release, “Maybe Sometimes,” from 2016, was completed with help from over 60 friends chipping in to a Kickstarter campaign that doubled its initial goal.

Downes truly appreciates the friends she’s made along the way.

“I have a footing, and people appreciate what I’m doing, and that feels really good,” Downes said in a recent interview.

“Sometimes I fall into that category — some of my stuff has a little twang to it — but I’m not country,” Downes said. “I didn’t grow up listening to country, it was more rock and classic ’70s rock, but the music all kind of teeters on a line of melding genres.”

Downes may live in Fairborn, but her musical connections to the village run deep.

“I’m not, like, from Yellow Springs,” she said. “But it’s where I started doing the most music. I’ve set my musical roots in Yellow Springs.”

In addition to frequent performances here, Downes hosts the weekly open mic at Peach’s Grill.
Over the last decade, Downes has become a favorite in the Yellow Springs, Fairborn and Dayton music communities.

She is a frequent solo performer, but also fronts the Kyleen Downes Band, with Charley Skira on guitar, Josclynn Garrison on bass, and Gub Pedrotti on drums. The band plays Downes’ original songs, plus a wide variety of lively covers, including a menagerie of classic rock favorites. The band allows Downes to play venues like Blind Bob’s, Peach’s and Yellow Cab Tavern, among other perks.

“There’s just something fun about being on stage with the full band, where I can kind of relax,” Downes said. “A guitar’s great for just accompanying singing, but I think people get way more into it if you’ve got a drumbeat going behind you, a little bass, being able to trade solos.”

Downes also has a side project with Garrison and multi-instrumentalist John Bir called Elenore + the Elephant, a self-described “pretentious postmodern pachydermial palooza band” that plays mostly private events. The three friends are all alumni of the Wright State Music Department.

Born in Minneapolis, Downes bounced around the country with her military parents and is a self-described “Air Force brat.”

“Growing up in the military, I’d never lived anywhere longer than three years,” she said, ultimately graduating from high school in Biloxi, Miss.

After school, she had no definite direction, so when an Army recruiter called her, asked the right questions and offered some good answers, Downes up and enlisted.

Why not the Air Force where her parents served?

“The Air Force never called,” Downes says with a smile and a shrug.

People are often surprised when she tells them she was in the Army, she said. But the experience was valuable.

“The Army taught me how to be loud,” she said. “You get to shout out cadences and sound off, and I thought that was fun.”

She ended up serving three years, including time in Germany, where her parents had been stationed when they met in the 1970s. Downes left the Army in 2005.

“I’d never lived here, but I thought I should be close to my mom.” So she moved to Fairborn in 2008. And it’s starting to feel like home.

“I guess you do your time away from home, but it’s nice being close. It’s been good having roots,” Downes said.

When Downes first moved to Fairborn, she did some substitute teaching in Xenia schools and considered pursuing an education degree. But when she started working at Absolute Music in Fairborn, it changed her trajectory.

“That’s when I met a lot of area musicians, and that’s how I got tuned in to Yellow Springs,” she said.

An Absolute co-worker, Mike Bisig of local band Grover, had gone to Wright State for saxophone and music education, and suggested she check it out.

“[Mike] liked the camaraderie at Wright State, it wasn’t hyper competitive, so it was more like doing music with friends,” Downes recalled.

In the end, she studied classical guitar with Jim McCutcheon at Wright State, which clarified her goal to teach private lessons rather than become a music teacher in a traditional classroom.

When it comes to the types of lessons she gives, “it runs the gamut,” Downes said. Certain students are classical, a lot of them come to me because of the music I perform — strumming and singing, learning how to play pop songs.” Lessons also include reading music, scales, playing lead, fingerpicking and other specialized skills tailored for each student.

“I try to give them a little taste of everything — my kids and even my adult students,” Downes said. “I write little lesson plans, and we’ll work towards the style they want to learn.”

Peach’s is the place

Besides giving lessons, Downes’ other steady gig is hosting the open mic at Peach’s Grill on Tuesday nights, a post she assumed early last year.

Downes, who performs at, as well as emcees, the event, finds the experience intimidating, she said.

“I get a little nervous every time I go,” she said. “It’s like performing and managing. … I’m really happy to be doing it, it’s teaching me a lot of things, it’s making me channel a new side to my personality — the emcee thing.”

For inspiration, Downes looks to WYSO radio hosts Niki Dakota, Juliet Fromholt and Tod Weidner, praising them for their ability to be concise and warm on the air.

“You have a schedule to keep, but you also have to stay relaxed, so the audience is having a good time.”

Unlike some hosts, she doesn’t often join in with the open mic performers on guitar or bass, but indulges another pleasure.

“I’ve been jumping in on the drums now and then. I love playing the drums,” Downes said, beaming. “I don’t do anything too fancy, but if it’s just keeping a beat, people can lock into that and pay attention to the singer — that’s fun. I love it.”

“For some folks who run open mics, they don’t get that benefit,” she said. “It’s great to have that partnership.”

After the release of “Friends” last year, Downes says she’s been in a state of “writing hibernation,” but is looking forward to coming up with new material in the year ahead.

“We’re taking some time to come up with new material. I want to record new stuff over 2019, and put something new out in 2020,” she said.

When it comes to her writing process, Downes said she starts with “hooks,” musical phrases that catch the ear of the listener, and writes a song around it.

“I think a good hook tends to be simple in nature,” she said. “Sometimes the simplest things,” she said before singing the “Buh-buh-buh bum” notes of Beethoven’s 5th Symphony.

“Best hook ever,” Downes said of Beethoven’s 5th. “Sometimes you shouldn’t overthink what makes people say ‘I like it.’”

For Downes, it’s about perspective.

“When you’re a musician, or if you do anything, you kind of forget how complex something that you’re doing looks to somebody who doesn’t know anything about it,” she said. “If you can sing and strum and play three chords, to someone who does not play an instrument, they’re going ‘cool!’

“Some songs I don’t think need to be overthought,” Downes added. “Sometimes there’s deeper layered meaning you’re trying to get out, and sometimes it just makes me go like this,” she said, bobbing her shoulders back and forth. “Sometimes that’s all the song is, so don’t make it more than it needs to be.”

Downes will perform solo at Yellow Cab Tavern on April 14, with a full band at the same venue for the Dayton BBQ Rodeo on April 27.

For more information, Downes can be found on social media or at kyleendownes.com.

One Response to “Kyleen Downes sings — A popular musical ‘Friend’”