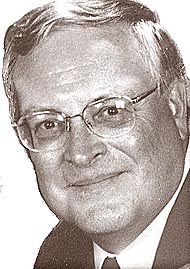 Born in Springfield, Ohio, and raised in Yellow Springs, Micky was the adored only child of Doris and Burnell Ehman. He attended Howe Military Academy and went on to Miami University, Ohio, where he met his one true love, Carol. They married after graduation, and he went on to Penn State University for his Ph.D. He later earned his MBA from Southern Methodist University, Texas.

Mike worked his way up from busboy to CEO during his career and was known for empowering others to be their best. His positions not only required him to move — to Ohio, California, Illinois, back to California, Texas, Pennsylvania, Utah and Maine — but also to travel extensively internationally. In his spare time, he could be found with family, friends, his critters, collecting railroad memorabilia and tending to his home and garden.

Mike is treasured by those who survive him: his daughter, Heather Ehman, in Saco, Maine; his son and daughter-in-law, Matthew Ehman and Kerriann, in Erie; his grandchildren, Juliana and Darrin Ehman; and his cousin and her husband, Louise Ehman Agardy and Dr. Franklin Agardy, in Palm Springs, Calif.

Private services will be held.

The family would like to thank Aseracare Hospice, Interim Home Health, Westlake Woods and his caregivers for the outstanding care they provided.

Askins Cremation Funeral Services in Erie is assisting the family with preparations.