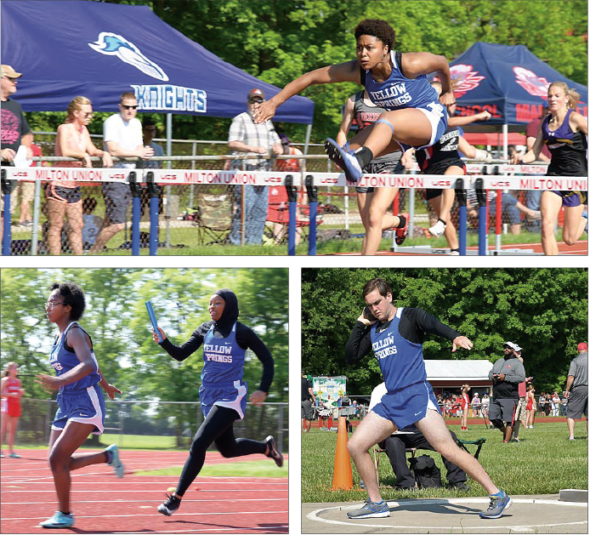 Top photo: Annyln Foster was crowned as the district champion in the 100 hurdles during the Division III Track and Field Championships at Milton Union High School, on Saturday, May 18. Her win qualifies her to compete Wednesday, May 22, in the regional meet in Troy. Bottom Right: Senior Harper Mesure sets up for the discus throw during the division championship meet. Bottom Left: Haneefah Jones passes the baton to Malaya Booth in the 400-meter relay during the division championship meet. The squad, which includes Annyln Foster and Sophia Lawson, earned second place, qualifying the four girls for the regionals May 22 in Troy. (Photos by Kathleen Galarza)

Annlyn Foster was crowned as the district champion in the 100 hurdles in a blazing time of 16.13; she also anchored the runner-up girls 400-meter relay team with teammates Haneefah Jones, Malaya Booth and Sophia Lawson (53.31).

All four girls — Foster, Jones, Booth and Lawson — who are only freshmen and sophomores, qualified to compete in the regional meet at Troy Memorial Stadium on Wednesday, May 22.

Complementing the girls and also earning a trip to the boys regionals was senior Teymour Fultz, who finished in third place in the 400 meters (52.36).

All competitors with top four finishes at districts earned a trip to the regionals. 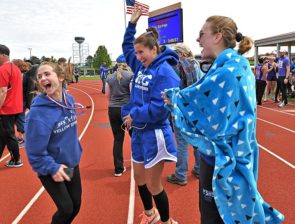 Several other Bulldogs had scoring performances that were noteworthy. Ninth-grader Yanne Gilley narrowly missed qualifying for regionals with a fifth-place finish in the pole vault (9´6), while sophomore Haneefah Jones was one step away from regionals in the high jump, earning a fifth place (4´10).

The girls 4 x 400 relay team of Devyn Deal, Foster, Jones and Avery Reeder ran a season best time (4:30.9), but came up short by one spot with a fifth-place finish.

Other scoring efforts were turned in by the sixth-place boys 4 x 400 relay team of Fultz, Gilley, Zach Lugo and Calum Siler.

Other solid efforts at the district meet were turned in by Jude Meekin, Harper Mesure, Jay Millman, Chanel Phillips and Andi Reeder. Overall, the girls team finished in eighth place, while the boys earned a 13th-place finish.