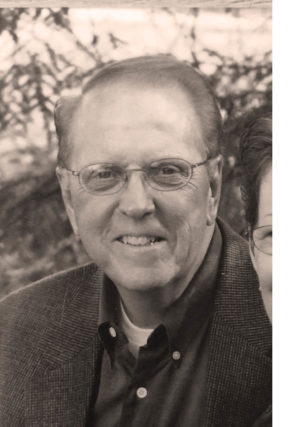 Patrick K. Peifer, of Yellow Springs, passed away surrounded by his family on Thursday, May 2, 2019, at Friends Care Community. He was 81.

Pat’s mother was Irish-American and his father German-American. He was raised in a row house in a Philadelphia neighborhood. He was from a proper Catholic family with four siblings: a sister and three brothers. When not running the streets with his friends, he attended parochial schools through high school.

Following his graduation from Father Judge High School, in 1957, he enrolled at the University of Dayton — a university that was, from the perspective of his family, in the cornfields of Ohio. In 1962, he graduated from UD with a Bachelor of Science degree in business administration. He then served in the United States Army for two years. He was in the Army at the time of the Cuban Missile Crisis, and would have served in the invasion of Cuba, but for diplomacy.

While studying at UD, Pat became acquainted with Linda L. Peifer (née Shaw). Linda was from Dayton and worked as a secretary at the Defense Electronics Supply Center. Pat and Linda were married in 1961. Following his honorable discharge from the Army, Pat and Linda began their life together. Pat began his career as a salesman. Patrick J. Peifer was born in 1964. Linda became a homemaker. Alexander E. Peifer was born in 1968. Christopher S. Peifer was born in 1974. Linda, after she and Pat had raised their three children, returned to work, and in fact, for a time worked as a secretary with Pat, who had become a sales manager.

In 1994, Pat and Linda moved to Yellow Springs, Ohio. Pat continued his work as a sales manager until his retirement. He and Linda enjoyed their retirement, whether it was to visit Alex and his family in Phoenix, Ariz.; to visit Chris, who was stationed with the United States Air Force in the United Kingdom; or working on their property in Yellow Springs, tending to his apple trees, mowing the expansive yard and building or fixing things at the house.

Pat had been at Friends Care Community since September 2017. He enjoyed the three square meals a day and the friends he had made while there. The family would also like to think he enjoyed their visits.

A visitation was held on Monday, May 6, 5:30–7:30 p.m., at Jackson Lytle and Lewis Funeral Home in Yellow Springs. Mass of Christian Burial followed on Tuesday, May 7, at St. Paul Catholic Church. Pat will be laid to rest in St. Paul Catholic Cemetery. In lieu of flowers, the family would like memorial contributions to be made to the American Diabetes Association in Pat’s honor. Condolences may be forwarded to the family by visiting http://www.jacksonlytle.com.