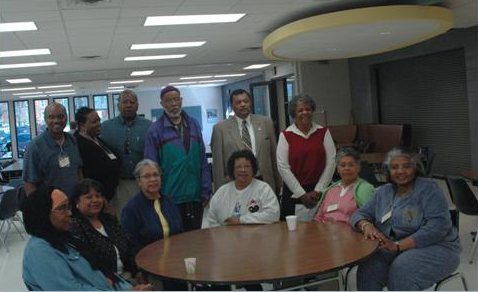 Members of the AAGGMV in 2009, as they celebrated the group's 10th anniversary. (Photo from aaggmv.org)

The African-American Genealogy Group of the Miami Valley, or AAGGMV, will celebrate its 20th anniversary on June 22 in Dayton. The Anniversary Celebration will convene at the Historic McKinley United Methodist Church from 10 a.m.–2 p.m.

The AAGGMV was founded on July 31, 1999 in Yellow Springs by Robert Harris, Arthur Thomas, Bennie McRae, Jr., Jonas Bender and Madelene Norris, and was incorporated in November of 2000. Among the group’s objectives are to promote interest in and add to the body of knowledge of family histories, genealogy and communities in southwest Ohio; to facilitate networking among researchers pursuing individual family histories and cultures; and to provide instructions and assistance in genealogical methods.

Highlights of the anniversary event will be a historic look at the organization by one of its founders, Arthur (Art) Thomas. This will be followed by “Finding the Raglands of Georgia,” a presentation from longtime AAGGMV member Dorothy Tuck on the genealogy of Meghan Markle, Duchess of Sussex.