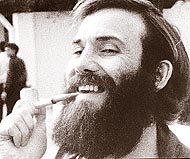 We are shocked and saddened to share that Tim Hackathorne passed away this weekend. To those who knew him, his loss is unexpected. He seemed as solid as bed rock. He was endlessly proud to have the bone density of a 20-year-old man at the age of 60. His death has shaken his friends and family.

Tim was born William Timothy Hackathorne in Xenia to Opal May and Daniel Dane Hackathorne in the fall of 1951. He was one of 10 children, and was preceded in death by both of his parents as well as three of his brothers, Danny Ray, Larry and George. He is survived by his remaining siblings Ronnie, Kenny, Lois, Bonnie, Robert and Don Lee. Tim leaves behind his children Noah, Amber and David Eagle. Tim loved children, and made his career at the Community Children’s Center for over 30 years. Even after he stopped working at the Center, Tim played a role in the lives of the village children by providing after school care for working parents and engaging with kids of all ages from his seat in front of the Emporium. Thus, Tim is also survived by the last 40 years of children in this village.

It was not only children that benefited from Tim’s advice and care. Tim chose the village of Yellow Springs to be his home, and he personified the adage that it “takes a village.” He was the embodiment of taking personal responsibility for one’s community — from picking up litter on the street, tending to volunteer vegetable plants, lending a helping hand, telling you when you were wrong, and suggesting what a better choice would have been. He simply showed up. Tim will be remembered for his love of reading, for his endless thirst for knowledge, for always being up for a card game, for his stubbornness, his firmness and his kindness. He will be missed from his daily routine.

Tim wanted to be laid to rest with his parents in Byron Cemetery. Funeral arrangements will be finalized soon and announced in the YS News.