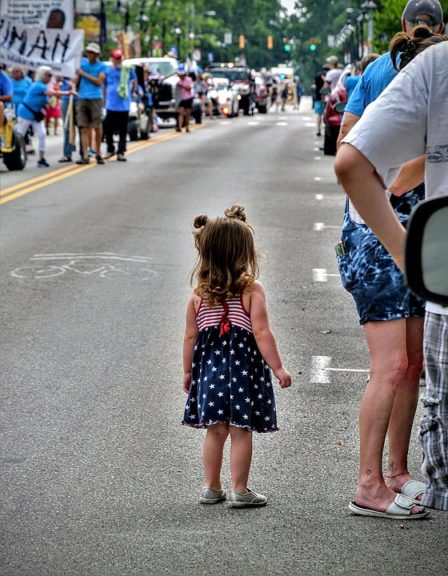 A tiny holiday celebrant watched with fascination as this year’s Fourth of July parade passed down Xenia Avenue. The holiday fell between two other big days for the village: the Pride march and Springsfest. (Photo by Kathleen Galarza)

A surfeit of celebrations: Fourth of July and 2019 SpringsFest

Yellow Springs ramped up the celebration quotient this last week, with the Fourth of July coming straight on the heels of the Annual Pride celebration and parade, then immediately following up with Springsfest 2019. Revelers on the Fourth were treated to the traditional parade down Xenia Avenue, a resplendent display of fireworks, followed by the option of a midnight swim in Gaunt Park pool. SpringsFest 2019 the following Saturday, marked the fourth incarnation of of the music festival, which brought 12 bands to the village for a live music extravaganza.