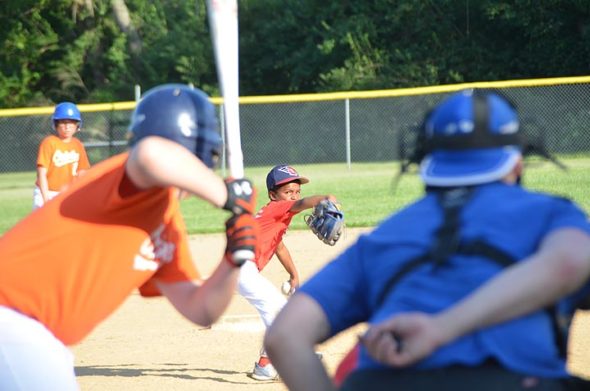 A little more than halfway through the season, the race at the top of the Minor League standings has tightened up, with the Sam and Eddie’s Open Books Brewers and the Tom’s Market Pirates now tied, and the Nipper’s Corner Yankees just two games back. Last week’s first game was lost to rain, but The Tom’s Market Pirates opened the week with a decisive 13–3 win over the Nipper’s Corner Yankees on Wednesday, June 26. The Pirates pounded out 19 total hits, and were led by Orion Sage-Frabotta’s two base hits, a triple, three RBIs and three runs scored, Tavey Johnson’s single, double and triple, three RBIs and one run scored and Sherrod Wheeler’s single, double, triple, three runs scored and one RBI. Pirate Nakye Miley, Wyatt Nilsson and Allee Bayard also collected multiple hits. Sameer Sajabi, Aiden Gustafson, Kyu Flateau and Noelle Fisher all had two hits to lead the Yankees.

The Yankees quickly bounced back with a decisive 17–3 win over the Peach’s Dodgers on Thursday, June 27. The Yankees bats were hot early, with six first inning runs, including a Henry Lake RBI double, Nico Sajabi’s two RBI double, Noelle Fisher’s two RBI base hit and Vinny Machi’s RBI single. The Yankees remained hot, adding five more runs in the second and another six in the fourth. Rookie Zander Breza, Kyu Flateau, Henry Lake and Sameer Sajabi all went three-for-three at the plate, with six RBIs from Nico Sajabi’s single and double. The Peach’s Dodgers totaled 12 hits, with Lucas Mikesell, Emil Lazar and Alex Main all getting multiple hits, with Lazar and Mikesell leading the team with three each.

Sam and Eddie’s Open Books Brewers helped put themselves into a tie for first with an 11–2 victory over Peach’s Dodgers in the first game on Saturday, June 29. The Brewers got their offense started in the first, when Henry Babb singled on a 2–0 count, scoring Logan Herzog. They put up three more runs in the third off Logan’s RBI single and sister Lili Herzog’s two RBI base hit. It was an even bigger third inning for the Brewers, with six more runs thanks to singles by Rocket Cowperthwaite, Luc Amend, Logan and Lili Herzog and Henry Babb. Cowperthwaite, Babb, Logan Herzog and Jaida Jones all went three-for-three at the plate and knocked in a combined eight runs. The Dodgers saw the ball well, racking up nine hits in the game. Alex Main, Emil Lazar, and Saul Alvarez all had multiple hits, with Malini Miller and siblings Lucas and Avanell Mikesell all contributing one hit each.

Saturday’s second game saw a rematch between the Nipper’ Corner Yankees and the Tom’s Market Pirates, but with a much different outcome than the meeting earlier in the week. The Yankees pounded out 28 hits, including three home runs, 17 base hits, six doubles and two triples in a decisive 20–3 win over the Pirates. The teams were tied at three after the first, but then the Yankees offense exploded and their defense stiffened. The Yankees pulled away for good with five runs in the second, including rookie Zander Breza’s three-run homer on a 0–2 count and Sameer Sajabi’s two RBI triple. The Yankees added another two in the third and their bats resulted in five more runs in each of the final two innings, including a fourth inning three-run homer by Noelle Fisher in the fourth and Sameer Sajabi’s two run homer in the fifth. They each went four-for-four at the plate and knocked in five RBIs. Neirin Barker and Henry Lake also went four-for-four at the plate and knocked in a combined five RBIs. Ainsley Johnson went two-for-three at the plate with an RBI, and there were RBI base hits from both Bryce Fleming and Tanner Miller.

The Major League completed a pair of games last week, the first being an 11–9 win for the Ye Old Trail Tavern Cardinals over the Adoption Link Dodgers on Thursday, June 27. The teams were tied at three after the first, then the Cardinals took the lead for good with four second inning runs, while adding another four runs in the fourth. Lucas Dunn scored three times for the Cardinals off a base hit and two walks, while Frank Machi and Colin Linderman each scored twice. Mateo Basora led the Dodgers with three runs scored off a single, a pair of walks and two stolen bases, while Isaac Grushon scored twice after a base hit, a walk and a pair of stolen bases.

Minor League games are played Saturday mornings and Monday and Wednesday evenings, with Major League games on Monday, Thursday and Saturday evenings. See the league website at http://www.ysbaseball.org for the full schedule, updates, results and standings for both leagues.