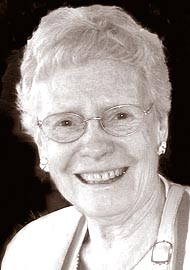 Reba A. Buckley, of Yellow Springs, formerly of Wilmington, Ohio, passed away Tuesday morning, Aug. 20, 2019, at Friends Care Community. She was 95.

As a young woman, Reba moved to Wilmington, where she met Bill, and was deeply connected to the community. She was a member of the First Christian Church-Disciples of Christ, and Eastern Star, where she was a Worthy Matron. She played piano and organ, and served as organist on many occasions, including at the chapel at the Clinton County Air Force Base. She retired from Champion Bridge Company after 44 years, where she was an accountant. With her warm and gracious manner, Reba made friends easily and kept them for life.

In high school, Reba became pen pals with a student in London. During World War II, she regularly sent her friend goods and food from the family’s farm in Waynesville. After the war, she was able to travel to London to meet the family she helped. Her pen pal’s father met her with a huge bouquet of flowers to express the family’s appreciation. Reba and Bill’s love of travel took them to many other destinations around the continental U.S., Hawaii, Nova Scotia, New Zealand and Australia. Reba also excelled at playing board games and held her own against her grandsons during family gatherings, playing well into the night on occasion.

Reba was a loving wife, mother and grandmother. We are grateful for everything she contributed to our lives.

The Order of the Eastern Star will have memorial services for Reba on Friday morning, Aug. 30, beginning at 11 a.m, followed by her funeral service at the Fisher-Edgington Funeral Home, located at 97 W. Locust St., Wilmington, with Pastor Tom Stephenson officiating. Interment will follow in the Sugar Grove Cemetery in Wilmington.

Friends will be received from 10 a.m. until the time of services at Fisher-Edgington Funeral Home. Contributions in Reba’s memory may be made to the First Christian Church-Disciples of Christ, 120 Columbus Street, Wilmington, OH 45177. To sign the online guest book, please go to edgingtonfuneralhomes.com.