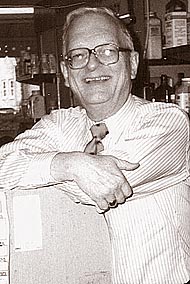 Carl Lewis Johnson, age 91, of Yellow Springs, passed away peacefully on Friday, Aug. 30, 2019, at Friends Care Community.  He was born on July 31, 1928, to Lewis and Mary (VanSwearengen) Johnson in Miamisburg, Ohio. In addition to his parents, Carl was preceded in death by his brother, Albert “Bud” Johnson, and sister, Melda Silberman. He leaves behind to cherish his memory his devoted wife of 67 years, Susan (Schradin) Johnson; and two sons, Dr. John William (Deborah) Johnson and James Mark Johnson; as well as beloved nieces and nephews.

Carl went to Seminary at Baldwin Wallace College before attending Ohio Northern University, where he received his degree in pharmacy.  He also served his country in the U.S. Army during the Korean Conflict. In 1967, Carl joined his brother, Bud, as partners in the Erbaugh & Johnson Drug Store, and the family moved to Yellow Springs from Oxford, Ohio. After Bud retired, Carl and Susan took over the business, working side-by-side as partners. After 30 years of serving the community as a pharmacist and small business owner, they retired in 1996.

Carl enjoyed living and working in Yellow Springs — their house was on Dayton Street, just a few blocks from downtown and the drug store. He dearly loved his home of 52 years. He and Susan took great pleasure and pride in maintaining and improving their old house, built in the 1850s — its yard, gardens, flowers and trees. During retirement, he and Susan took time to travel and see the world. They also enjoyed seeing their two sons as often as possible: John and Debora have a working farm, raising free-range cattle in Knox County with horses, dogs and cats to look after and enjoy; Jim moved around during his working career, before returning to the village in 2012, and they enjoyed spending time with him in Cleveland, New York City, Washington D.C., Vancouver and Bellingham, Wash.

Carl was a member and past president of the Yellow Springs Lions Club. He was an avid golfer and loved to play tennis.

A celebration of Carl’s life will be held on Saturday, Sept. 7,  at Jackson Lytle & Lewis Funeral Home, Yellow Springs, beginning at 10 a.m., with Pastor Doug Forsythe officiating.  Carl will be laid to rest in Glen Forest Cemetery.

In lieu of flowers, the family requests memorial contributions be made to the Miami Township Fire and Rescue Association to support the EMT ambulance team for their wonderful emergency care of Carl over the past few years. Expressions of sympathy may be made to the family by visiting http://www.jacksonlytle.com.

One Response to “Carl Johnson”