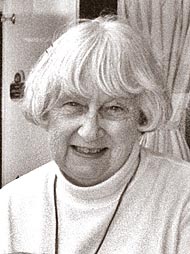 Helen was born in Norwalk, Conn. on Aug. 28, 1927. Her father, Leslie A. Pitman, was from Nova Scotia and her mother, Ellen Cedergren Pitman, was the daughter of Swedish immigrants. At the age of 18, she boarded an Ohio-bound train to come to Antioch College where she majored in English Literature. While at Antioch, she did co-ops at Mademoiselle Magazine and Women’s Wear Daily in New York City. While living in Yellow Springs, she met the love of her life, Robert Hammond. They were soon married and she settled down as a farmer’s wife and soon was the mother of three rambunctious boys: John, Scott and Bill. She was room mother for many Yellow Springs elementary school classes, a Cub Scout den mother and very active in the Friendly Gardeners Club. Her pastimes included flower gardening, genealogy — she was a member of the Mayflower Society, having successfully traced her own history back to the original passengers on the Mayflower — and being grandma to four lovely granddaughters.

After Robert’s death in 2004, she spent many years living on the family farm, enjoying her hours sitting on the back porch watching hummingbirds and getting through the winters watching OSU and Bengals football.

Helen was preceded in death by her husband, Robert Dingle Hammond; her third son, William Alexander Hammond; and her brother, Leslie N. Pitman, of Canterbury, Conn. She is survived by her sons, John Robert Hammond, of Springfield, and Scott Alan Hammond and his wife, Karen (Vennerholm) Hammond, of Yellow Springs. She has four granddaughters, Megan Alexandra Hammond, Rachel Katherine Hammond, Emily Faye Hammond and Molly May Hammond; and one great-granddaughter, Nora Renee Hammond.

Helen is the last to pass of her local circle of best friends that included Marianne Grote, Pat Dell and Bonnie Fulton.

The family has no plans for public services at this time and requests that donations be made in Helen’s memory to Friends Care Community in Yellow Springs and Hospice of Dayton. Online condolences may be made to the family at http://www.mccolaughfuneralhome.com.