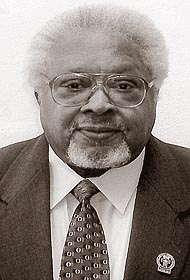 Robert was born March 13, 1934, to John B. and Mary Frances (Williams) Stokes in Cartersville, Ga. He was a graduate of Dunbar High School (1951) and briefly attended Central State University. He enlisted in the U.S. Army and served as a medical specialist for three years. He grew up attending Zion Hill Missionary Baptist Church and served there in many capacities, including usher, Sunday school teacher, superintendent of Young Davids and financial treasurer. Robert was a former U.S. Postal Service employee and retired as the supervisor of flooring at Rike’s Department Store. He was considered a great friend by everyone who knew him.

Robert was preceded in death by his parents; his sister, Rosanna; his brother, James; his wife, Julia (Greene); his former wife, Rue (English); and his stepson, Christopher English. He leaves to cherish his memory his daughters, Anita Stokes, Vicki (Jimmy) Davis, Kimbrala (Derrick) Woodard and Teresa (Isaac) Lovings; his sons, Anthony Stokes and Kevin (Karen Gardner) Stokes; his stepson, Keith (Tammy) Greene; his nephew, Dwayne (Sylvia) Stokes; his former wife, Helen (Shepard) Stokes; his grandchildren, and great-grandchildren; his cousins and other family members and friends.

Funeral services will be held Monday, Sept. 23, 2019, at 11 a.m., at Zion Hill Missionary Baptist Church, located at 1900 W. Third St. in Dayton, with Pastor Junior F. Greenlee officiating. The family will receive friends one hour prior to services. Interment will be held at Dayton National Cemetery. Arrangements entrusted to Thomas Funeral Home. Online condolences may be sent to the family at http://www.thomasfunerals.com.