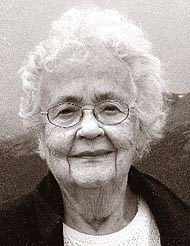 Beatrice R. Whitaker Cottom was born in Indianapolis on Nov. 4, 1923, and lived most of her life in Irvington, on the east side of Indianapolis.  She graduated from Butler University in 1946.  After graduation, Bea worked for the Indiana State Board of Health.  Bea married Joseph Cottom (1925–1979), also of Irvington, in 1947 and had two daughters, Irene Cooke (Bill Cooke, 1946–2012), of Goleta, Calif., and Carol Cottom (Bruce Bradtmiller), of Yellow Springs. She was the grandmother of Louisa and Carl Bradtmiller and Jessica Cooke and had five great-grandchildren. She attended many soccer games, theater presentations and orchestra concerts during visits to Yellow Springs.

In 1958, Bea began a 15-year career teaching kindergarten. While teaching, she earned a master’s degree in library science from Butler University and then spent 13 years as an Indianapolis Public Schools librarian.

In the summers and after retirement she enjoyed traveling, reading and traditional rug hooking.  She won several awards for her hooked pieces and was a member of the American Traditional Rug Hooking Guild. Bea loved telling people she was a hooker. She visited Africa, Australia, New Zealand, China, India, Russia, Singapore, islands in the Caribbean, many countries in Europe, Panama Canal, Canada and most of the 50 United States, including Alaska and Hawaii. She loved visiting family and friends in many states.

Bea was a 77-year member of Alpha Chi Omega sorority and a 50-plus year member of Downey Avenue Christian Church. She was a member of Delta Kappa Gamma, education honorary, and served as president of the Irvington Women’s Club, Irvington Home Study and Benton House Association groups. She was also a past president of the Butler Literary Club. Bea volunteered at the Indianapolis Museum of Art and was on the east group board of the Indianapolis Symphony. She was active in PTA while her children were young. She was on the boards of Irvington Historical Society, Children’s Guardian’s Home Guild and the Howe Alumni Association. In 1999, Bea received the George Cottman award from the Irvington Historical Society for devotion to the preservation of Irvington history.

In 1995, Bea moved from her home in Irvington to a cottage in a retirement community, and in 2017, she moved to Yellow Springs to be closer to family. She died at Friends Care Center on Oct. 16, 2019. We are grateful for the staff of FCC and Hospice of Dayton who cared for her so well and all the members of the YS community who helped enrich her time here.

Donations can be made in Bea’s memory to Friends Care Center, Irvington Historical Society or T.C. Howe Alumni Association.