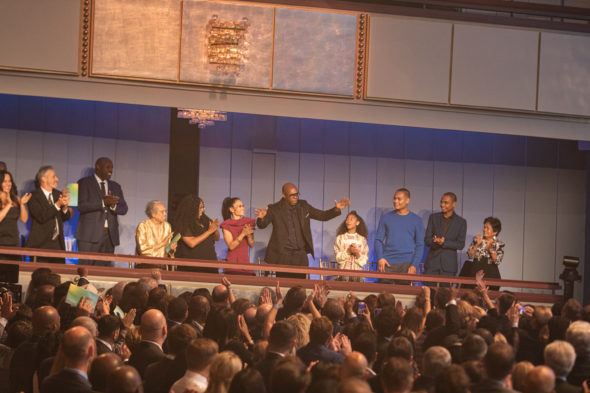 Dave Chappelle, surrounded by his family, received the Mark Twain Prize for American Humor in a gala performance Sunday, Oct. 27, at the John F. Kennedy Center for the Performing Arts in Washington, D.C. (Submitted photo from the Kennedy Center by Tracey Salazar)

In a star-filled gathering, surrounded by family, friends and fellow entertainers from throughout his 30-plus-year career in show business, comedian and actor Dave Chappelle was awarded the 22nd Mark Twain Prize for American Humor on Sunday night, Oct. 27, at the John F. Kennedy Center for the Performing Arts in Washington, D.C.

In accepting the award at the end of a nearly three-hour performance featuring musical offerings and spoken testimonials from nationally known comedians, actors and musicians, longtime Yellow Springs-area resident Chappelle expressed not only his happiness at seeing the faces all around him of so many people from throughout his life, but also his appreciation at being part of the comedy community.

He gave special thanks to his wife, Elaine Chappelle, and his mother, Yvonne Seon.

“Elaine, you help me and improve me in everything I do,” Chappelle said in front of the sold-out Kennedy Center audience.

He also recounted some of the ways his mother had encouraged and supported him when he was a teen-aged aspiring comic — bolstering his confidence as a sensitive person in a frequently harsh world, telling him that his story-telling gift was like that of an African griot and accompanying him to his early comedy club shows.

“She’d do a full day of work,” he told the crowd, turning to his mother to speak to her directly. “You’d be there falling asleep, just waiting for me to go on.” Facing the audience again, he continued: “She would watch my show every night.”

Then, in a familiar Chappelle-style segue, from serious sentiment to punchline, he paused and asked the audience, “Do you know how long that car ride home is?” noting that his raunchier jokes were sometimes met with a subtle, maternal admonition.

But admonitions were slight and far between Sunday night, as a string of high-profile personalities praised Chappelle for his “fearlessness,” “truth-telling” and the “honesty” of his comedy.

Among the guests honoring the comedian were Grammy and Academy Award-winning singer and songwriter John Legend, who grew up in nearby Springfield; actors Morgan Freeman and Bradley Cooper; actress and comedian Tiffany Haddish; comedians Jon Stewart, Sarah Silverman and Aziz Ansari; and musicians Q-Tip, Mos Def and Frederic Yonnet.

Stewart, who has toured recently with Chappelle and was a guest in August when the comedian put together a celebrity-filled concert in Dayton in the wake of the mass shooting there earlier that month, spoke of his respect for his friend’s integrity as a performer — walking away from a $50 million deal with Comedy Central when the work didn’t feel right — and his appreciation of Chappelle’s humanitarianism.

“I watched him help a city heal a wound of violence and replace it … with love and with compassion,” Stewart said.

The annual Mark Twain Prize, initiated in 1998 by the Kennedy Center, recognizes individuals “who have had an impact on American society” in ways comparable to the award’s namesake, 19th-century writer and humorist Mark Twain.

Murphy, who was given the award in 2015, praised Chappelle in a pre-taped video.

“Dave is so much smarter than everyone,” Murphy said. “He’s stretched the art form. He is the voice of his generation, no question.”

Chappelle, 46, grew up in Washington, D.C., spending his middle school years and subsequent summers in Yellow Springs, where his father, the late Bill Chappelle, was on the music faculty at Antioch College. His mother is an ordained Unitarian Universalist minister and retired university professor who was the first director of the Bolinga Black Cultural Resource Center at Wright State University in nearby Fairborn.

The co-creator and star of the widely acclaimed Chappelle Show on the Comedy Central cable station debuted in 2003, Chappelle in recent years won an Emmy for his November 2016 appearance on Saturday Night Live and Grammy Awards for the vinyl recordings of a series of comedy specials released on Netflix, one of which also won an Emmy.

A taping of the Oct. 27 award event will be edited and aired on PBS stations nationwide on Jan. 7, 2020.

A longer story from the event will appear in a future print edition of the Yellow Springs News.