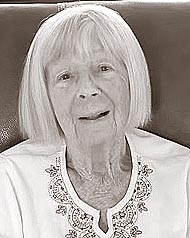 Liselotte Annemarie (Visser) Stave passed away peacefully on Sept. 27, 2019, in Roseville, Calif. She was the wife of the late Dr. Uwe Stave. She is survived by her four children, Holger Stave (Julie Howe), Christoph Stave (Mary Beth Grote), Caroline Stave-Viemeister (Jane Viemeister) and Simone Demarzi (Alvaro); 15 grandchildren; and 12 great-grandchildren. Many were able to attend her celebration of life at the Christian Community the following Monday.

Born in Hamburg, Germany, on March 22, 1925, she had a happy early childhood and attended the Waldorf School. As a young adult in Hamburg, she survived WWII while living in the city. Her memories of the war time had a deep impact on her life. She married Uwe Stave in 1946, after the war. The growing family moved to Marburg an der Lahn in 1953, and then to Yellow Springs in 1961. There she became active in the Antioch Theater, Shakespeare festivals and children’s theater and helped establish Center Stage. Her legacy in YS lived on for many years in the Oberufer Christmas Plays, which she introduced to that community and which were performed long after she moved away. She was known best as “Lotti” and her talents in art and theater gave her the tools to contribute to all the communities she lived in.

Lotti and Uwe moved to Miami, Fla., in 1975, and then to Herdecke, Germany, in 1979, due to Uwe’s work. During her years in Florida and Germany, she perfected her delicate work in stained glass. Lotti’s stained glass art became highly sought after, from Florida to Germany and then to California. She was a perfectionist in everything she touched.

In 1988, Uwe and Lotti moved to Sacramento, Calif., where they both entered into the large anthroposophical community. Lotti became active once again in theater, working in speech and drama at the Rudolf Steiner College, and in the mid-1990s began directing the “Four Mystery Dramas,” written by Rudolf Steiner, one of which was invited to be performed in Dornach, Switzerland at the Goetheanum. This was the pinnacle of her career in acting/directing and her study and understanding of Rudolf Steiner’s work.

She and Uwe celebrated their 70th wedding anniversary together in 2016 before Uwe passed early in 2017. She lived her last years under the care and support of her four children and their families. She leaves behind a legacy of devotion for reaching out to the community with the color of light and the expression of word and emotion, always the consummate hostess to all.

An internment and memorial in Yellow Springs has yet to be scheduled.