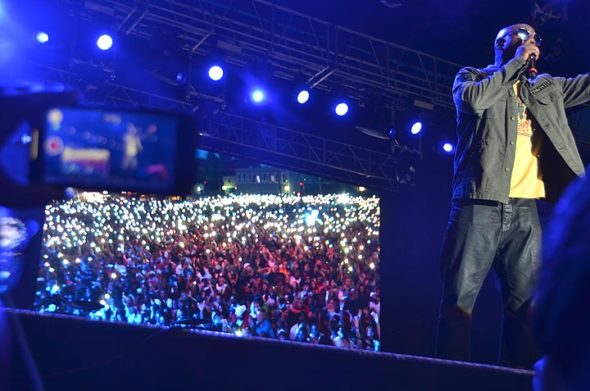 Comedian and actor Dave Chappelle, shown here at a celebrity-filled show that he organized Aug 25 in Dayton in response to the deadly mass shooting there earlier that month, will be honored Sunday, Oct. 27, with the Mark Twain Prize for American Humor at the John F. Kennedy Center for the Performing Arts in Washington, D.C. (Photo by Carol Simmons)

Comedian and actor Dave Chappelle, who lives with his family just outside Yellow Springs, is set to receive the Mark Twain Prize for American Humor at a star-filled performance Sunday evening, Oct 27, at the John F. Kennedy Center for the Performing Arts in Washington, D.C.

Among the guests scheduled to appear in honoring Chappelle are Grammy and Academy Award-winning singer and songwriter John Legend, who grew up in nearby Springfield; Legend’s wife, the model and television personality Chrissy Teigen; actors Morgan Freeman and Bradley Cooper; actress and comedian Tiffany Haddish; comedians Jon Stewart, Trevor Noah and Sarah Silverman; and musicians Q-Tip and Frederic Yonnet.

The annual Mark Twain Prize, initiated in 1998 by the Kennedy Center, recognizes individuals “who have had an impact on American society” in ways comparable to the award’s namesake, 19th century writer and humorist Mark Twain.

Chappelle, 46 is the son of the late Bill Chappelle, who was on the music faculty at Antioch College in Yellow Springs, and Yvonne Seon, an ordained Unitarian Universalist minister and retired university professor who was the first director of the Bolinga Black Cultural Resource Center at Wright State University in nearby Fairborn.

Chappelle, who in recent years won an Emmy for his November 2016 appearance on Saturday Night Live and Grammy Awards for the vinyl recordings of a series of comedy specials released on Netflix, one of which also won an Emmy, is being recognized by the Kennedy Center as “an internationally recognized stand-up comedian and actor whose trademark wit and sharp, irreverent social commentary explores race, popular culture, sex, drugs, politics, and fame.”

The Oct. 27 award event will be taped by WETA Washington, D.C., as “Dave Chappelle: The Kennedy Center Mark Twain Prize” and is scheduled to be aired on PBS stations nationwide Jan. 7, 2020, at 9 p.m. Eastern Time.