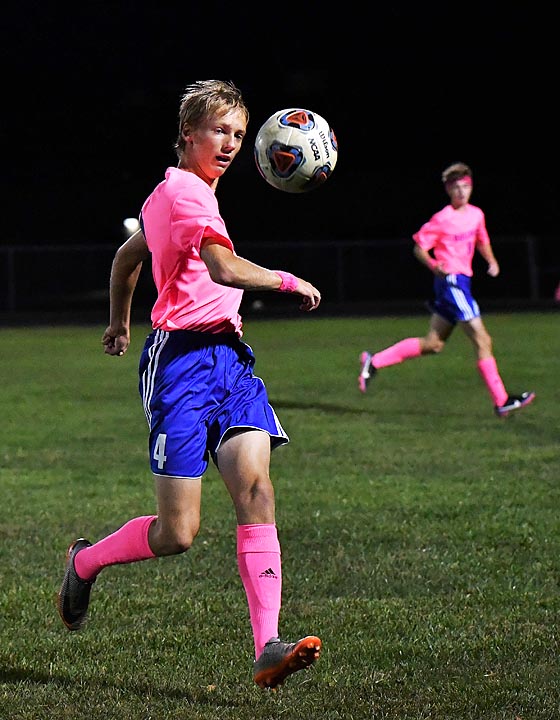 A home win Saturday, Oct. 5, against Fairborn High School, put the varsity boys soccer team one win away from securing the Metro Buckeye Conference championship. No. 4, Vaughn Hendrickson, is pictured. The Bulldogs bested Fairborn 4–0 in an evening contest that concluded the inaugural “Pink Out” event, hosted by the girls team to benefit and promote women’s health. (Photo by Kathleen Galarza)

For the past five years, the battle for the Metro Buckeye Conference title has been fought between the Bulldogs and the Lions of Emmanuel Christian.

Once again, the title of conference champion hung on the outcome of the same two teams.

With the Bulldogs heading undefeated into their last two games of conference play, beating the Lions would mean they would retain the title they took back from them just a year ago.

Celebrating Senior Night, the Bulldogs were not only ready for the fight, but the packed gym to help cheer them on, hyped them up even more. Starting off with the serve, one of the Bulldogs’ seniors, Tyler Linkhart, served up three aces to give notice to the Lions that they meant business.

The Lions weren’t backing down and battled back to keep the set close, until Linkhart rotated around back to the serving position again, in which she then served up eight straight points (4 of those aces) to pull ahead 19–11.

With Linkhart setting, using the talents of her fellow seniors, Olivia Snoddy and Chanel Phillips, they took the first set 25–15.

The second set saw the Lions come out flat unable to handle the serves from Snoddy and Aaliyah Longshaw (5 aces and 13 digs) as the Bulldogs took the set 25–9.

In the third and final set of the evening, the Lions stepped their game up, but they couldn’t overcome the strong arms of Angelina Smith (2 kills, 5 aces, 3 blocks and 11 digs) and Emma Ronnebaum (17 kills, 6 aces, 12 assists, 1 block and 6 digs).

The Bulldogs swept the Lions by taking the third set 25–17.

The Bulldogs are, once again, the Metro Buckeye Conference Champions.

For their seniors, this is their third conference title in their high school careers, which includes 2016, 2018 and 2019. The Bulldogs are now 16–1, with two regular season matches left in the season. They will begin their tournament play on Saturday, Oct. 19, at 11 a.m. at Covington High School.

The newly crowned Legacy Champs were led once more by standout freshman Cheyan Sundell-Turner. Turner passed the first mile in 6:24 and finished the race in second place with a time of 21:28, laying a solid foundation for the team win.

Freshman Josie DeWine passed the first mile in 7:05 shortly followed by Avery Reeder (7:10) in a large pack of runners.

Then over the brutal hills of the second and third mile, they showed off their class by demonstrating focus, heart and smart racing, working themselves into top-10 positions.

Ivy Tebbe fought hard over the entire three miles and delivered her crucial contribution to the team win with a 40th place in a time of 27:28.

He congratulated the Lady Bulldogs for their impressive team performance, stating that he has not seen such a strong compact team performance at a Legacy race in a very long time.

Standout of the day, however, was McKinney Middle School runner Tiger Collins, beating her personal best by about a minute and crossing the finish line of the two-mile junior high girls race in 16:54.

The McKinney boys were led by Jia Sundell-Turner, crossing the line in 14:08 and delivering a strong performance over the hilly two-mile course.

Bulldogs Jackson Bleything and Griffin Roberts competed in the high school boys race. Bleything posted a 22:37 and Roberts a 25:08.

The McKinney Boys will try to defend their Metro Buckeye Conference title from last year this coming Friday, Oct. 11, in Cedarville, at the MBC championships. The high school girls will compete in the first race that starts at 5 p.m. Yellow Springs Assistant Cross-Country coach John Gudgel looks forward to an exciting night, commenting, this could become a very good day for the Bulldogs.

Then, on Tuesday Oct. 15, the Bulldogs will host their traditional Invitational at Young’s dairy. Racing starts at 4:30 PM.

“We had a great week,” Yellow Springs boys soccer coach Ben VanAusdal said Monday about the team’s last two games the week before.

The Bulldogs first bested Franklin Monroe 7–0 on Tuesday, Oct. 1, and then went on to shut out their cross-county rival Fairborn 4–0 Saturday, Oct. 5. Both games were at home.

Senior Kayden Boyer led the team in scoring both games, with five goals Tuesday and three on Saturday.

Eli Eyrich and Dylan Mapes each scored as well, on Tuesday.

“It was a good game, a good win for our boys,” VanAusdal said.

“He kept their best player from scoring.”

VanAusdal said Bledsoe has been consistent all season, “playing really well, and containing all the the best players, keeping them scoreless.”

The two wins put the Bulldogs in position to be the Metro Buckeye League champs, if they win their next game, Tuesday, Oct. 8. against Troy Christian, according to the coach. Their record going into the game was 8–4–2.

The last game of the regular season is Thursday, Oct. 10, against Greeneview.

Tournament play begins Oct. 15, against Legacy Christian at Yellow Springs High School. The Bulldogs are seeded sixth out of 29 teams.

“That was unexpected,” VanAusdal said.

“I feel so proud of my boys right now,” he said.