More than 1,000 runners from over 40 schools participated in the 34th annual Yellow Springs Cross Country Invitational at Young’s Dairy. Pictured is the junior high girls race taking off. (Submitted Photo by Peter Dierauer)

Over 40 schools run in YS tourney

On Tuesday, Oct. 15, the Yellow Springs High School Cross-country team hosted the 34th annual Yellow Springs Cross Country Invitational at Young’s Dairy. With over 1,000 competitors from over 40 schools, this is one of the largest cross-country events in our region.

The Yellow Springs High School girls team, which has been very successful this season, did not compete, as they were preparing to participate in the district tournament four days later.

Head Coach Isabelle Dierauer explained: “Our girls have a really good chance to qualify for the regional tournament this coming Saturday in the district tournament, and competing on a Tuesday before a big race on Saturday is just not good preparation.”

Only one Yellow Springs High School girls team “has been able to qualify for regionals in the past,” the coach said, “thus, it is a big deal for us, and we want to provide our girls the best environment and condition possible.”

The McKinney boys team placed 11th as a team, and had a strong showing overall at the final middle school race of the 2019 season.

Running some of their best times of the year, the YSHS boys and girls cross-country teams competed at the district meet this past Saturday, Oct. 19, at Cedarville University.

The 2019 Metro Buckeye Conference championship girls’ team fell one spot short of qualifying as a team for the regional meet. The top seven teams move on to the regionals, and the tandem of Josie DeWine, Evelyn Potter, Avery Reeder, Cheyan Sundell-Turner and Ivy Tebbe finished in eighth place out of 22 teams. Seniors Potter and Tebbe competed in their last race.

Freshman Sundell-Turner, with her 18th place (20:39) finish, qualified for the regional meet this Saturday, Oct. 26, beginning at 11 a.m., at Troy Memorial Stadium. Cheyan is the first YSHS girls runner to qualify for the regional cross- country meet since 2012.

On the boys side, the tandem of J.P. Anderson, Josh Clark, Rilo Oberg and Griffin Roberts put forth a solid effort, as three of the four runners ran season best times. All four runners return next year in what promises to be an exciting 2020 season.

The girls team garnered three trophies this season, with first-place finishes at the MBC League meet and the Legacy Christian invitational and a runner-up finish at the Fairborn invitational. Coaches Isabelle Dierauer, Peter Dierauer and John Gudgel and volunteer Devon Lewis agreed that this was one of the best seasons in recent memory, and they look forward to next year. 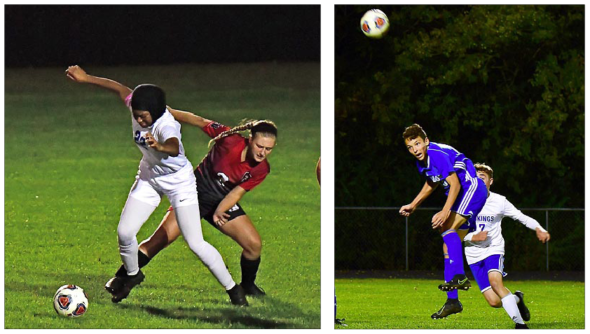 Left, Haneefah Jones fought off a challenge from a Newton player during the Yellow Springs High School girls soccer team’s loss to Newton on Oct. 10. The girls team’s season ended with a tournament loss to Mechanicsburg on Oct. 14. Right, Eli Eyrich went up for a header during the YSHS boys soccer team’s hard-fought, 2–1 loss on Oct. 19 to the visiting Miami East Vikings, who scored the game-winning goal in the final eight minutes. (Photos by Kathleen Galarza)

Junior Kayden Bryan scored five of the Bulldogs’ goals, and freshman Eli Eyrich scored one, according to coach Ben VanAusdal, who also credited strong defense for the win.

“Our defense played really, really well,” he said this week.

The team fell, however, in the tournament’s second game, Saturday, Oct. 19, against Miami East, in New Paris.

The 2–1 final score reflected the “hard-fought” effort, which was tied at 1–1, until the Miami East Vikings pulled ahead with just eight minutes left in the game.

VanAusdal said he was pleased with team’s efforts all season, which ended with a 10–6–2 record.

The team will be losing graduating seniors Shawn Adams, who had seven shut out games as goalie, and Vaughn Hendrickson, “who became a really solid player this year and helped mentor the younger players,” the coach said.

Expected to return next year are the 12 freshmen who joined the team this season, as well as standout players Kayden Bryan, who led the Metro Buckeye League in scoring with 32 goals, and junior Finn Bledsoe, a team captain who kept opposing players from scoring.

“We have a bright future,” VanAusdale said.

The Metro Buckeye Conference Champion Bulldogs were knocked out of the Division IV volleyball tournament Saturday, Oct. 19, in a loss to Jackson Center.

The D-IV fourth-seed Jackson Center team, from Shelby County, were the division state champs in 2016, and the top seed last year.