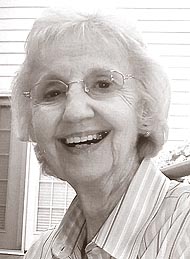 Phyllis was a resident of Dayton for most of her life, where she worked for Ohio Bell, now AT&T. She moved to Yellow Springs with her husband Glenn in 1990. She was a woman of faith, having been actively involved in the Lutheran and Protestant churches in both Dayton and Yellow Springs, and in the Unity of Dayton Church.

The family will hold a private burial and memorial in Lewisburg, Ohio. Those who wish may recognize Phyllis with a donation to the Glen Helen Association or the Yellow Springs Senior Center.

One Response to “Phyllis Jeanne Duckwall”