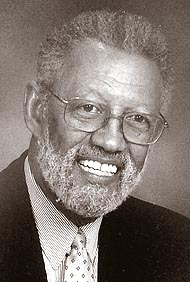 Larry Henry Kimbro was born on March 10, 1936, in Nashville, Tenn., the son of the late Mr. Henry Kimbro and Mrs. Nellie Bridges Kimbro. Larry was educated in the Nashville public schools. He earned a bachelor of science degree in accounting from The Tennessee State Agricultural and Industrial University in 1957. He was employed at Wright-Patterson Air Force Base as a budget analyst.  During that time, he received his master of science degree in business administration from Central Michigan University. He worked at Wright-Patt for over 35 years before he retired in 1996.

He was a faithful member of Central Chapel AME Church, where he was elected to serve on the Trustee Board. He was also a member of the Sons of Allen, a connectional men’s fellowship of the AME Church; and served as an usher/greeter. He was a member of the Freemasons (33rd degree) and Shriners International.