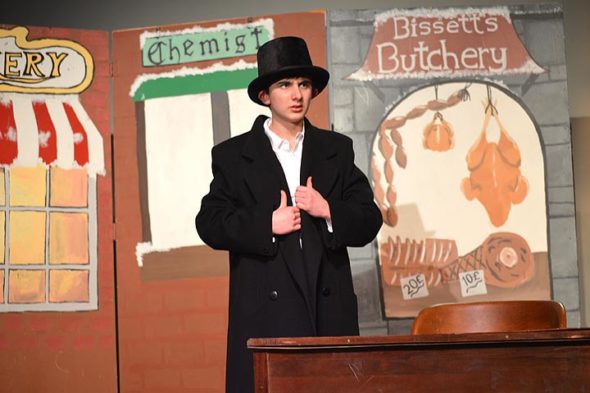 Rare all-district production— A musical ‘Scrooge!’ for the holidays

For lovers of holiday music and cheer, Yellow Springs High School will bring the spirit of the holidays to life with an uplifting, all-district performance of “Scrooge! The Musical.”

YSHS is presenting “Scrooge! The Musical” from Thursday, Dec. 12, to Sunday, Dec. 15, at the Foundry Theater, at Antioch College,  920 Corry St.

The musical is an interpretation of “A Christmas Carol” by Charles Dickens. Lorrie Sparrow-Knapp, a performing arts teacher at YSHS, is directing the play. JoFrannye Reichert, a music teacher at Mills Lawn School, is choreographing.

Sparrow-Knapp said she expects the show to sell out. The theater will have a seating capacity of 150 people.

Published in 1843, “A Christmas Carol” follows Scrooge and his personal growth from an unfriendly grump into a kinder and more generous person. But first, he is visited by the ghosts of Christmas Past, Christmas Present and Christmas Yet to Come.

“It is the coming of light into a person’s heart,” Sparrow-Knapp said. “It was very popular then, and it’s still popular now.”

Sparrow-Knapp also described it as an amazing story with a substantive script. Furthermore, the play is about opening oneself up to love instead of greed and self-interest, she said.

In addition, for the first time in recent memory, students from all the schools in the Yellow Springs School District are participating in the play. A few members of the faculty will also make an appearance.

Sparrow-Knapp said the musical was a good way to bring the entire district together. Reichert echoed that sentiment and said that having district-wide involvement in the play has been a great experience.

Sparrow-Knapp estimated about 80 to 90 students are partaking and said there are now plans to do an all-district play about every five years.

“I think this is a wonderful introduction to the idea of the districtwide performance,” Reichert said.

Diamond, 17, described Scrooge as a dynamic character who undergoes a personal transformation, which made building and embodying the character difficult.

“It is an emotional journey every time I do the show,” Diamond said. “It’s difficult, but also very rewarding. With Scrooge, I get to have a self-awakening every time I do it.”

Diamond said viewers will also experience a range of emotions while watching. He lauded Sparrow-Knapp and Reichert, as well as the costume designer, all of whom he described as very helpful. 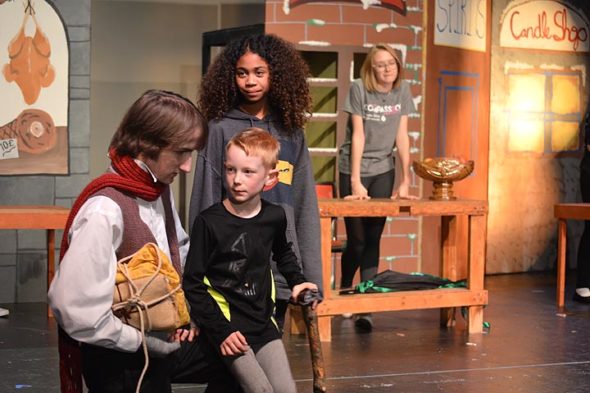 Sparrow-Knapp said she has wanted to do a holiday musical for a number of years and was also excited to work with Reichert. She added that everyone can enjoy the play regardless of their religion, because at it’s core, it is a celebration of the holiday season.

“People should come and see it because we need this message right now,” Sparrow-Knapp said. “In our current climate, where some folks believe you just need to look out for yourself, we should be reminded our business is human kind.”

Working with so many students and a wide range of ages came with the usual coordination challenges, but Sparrow-Knapp said the group has been lovely to work with. She said there was ample student involvement on the show, which included painting the set.

Reichert said the choreography was inspired by different performance styles, such as British music hall, pantomime, and English country dance.

Reichert has taught dance from the pre-school level to the college level and has been involved in the performing arts for decades. She currently teaches kindergarten through sixth grade. This will be the 14th high school play she has been involved in.

Sparrow-Knapp encouraged people to come out and support the arts and acknowledged the importance of arts education.

“Arts are where all of our learning in school is brought together to create something new and different,” Sparrow-Knapp said. “Arts are where real synthesis of learning happens.”

Tickets can be bought online at showtix4u.com. There will be a limited number of tickets at the door.