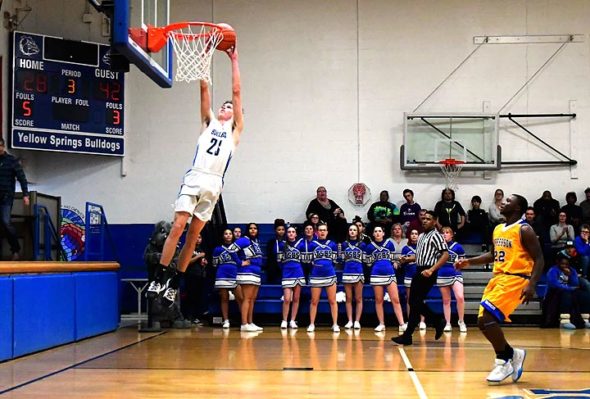 Yellow Springs High School sophomore DeAndre Cowen dazzled the home crowd with a slam dunk during the third quarter of the boys varsity basketball game on Friday, Jan. 10. Cowen scored a career-high 30 points in the game, but his high-flying efforts weren’t enough, as the team fell 64–50. (Photo by Kathleen Galarza)

The Bulldogs (2–4 in the conference, 2–9 overall) had a golden opportunity to move into a three-way tie for fourth place in the Metro Buckeye Conference, or MBC. In their way stood the Jefferson Township Broncos, an experienced team with a high-powered offense.

Jefferson came into the matchup averaging 59.8 points per game, highest out of all eight teams in the MBC. Yellow Springs, by comparison, was last in the conference in scoring, at 34 points per game.

For YSHS to pull out a win, they would have to limit Jefferson’s high-flying offense and create more offense of their own. Especially important was limiting Jefferson’s leading scorer, D’Shawn Ferguson, who entered the game averaging 17.9 points.

Tensions were high between the teams before the game even started, due to a previous altercation between the Yellow Springs and Jefferson girls’ basketball teams, according to players.

Eyrich also highlighted the mental aspect of the game, predicting that, “there’s going to be a lot of talking.”

“We have to focus on not panicking and playing our game,” Eyrich said.

The game began peculiarly, with YSHS grabbing a 1–0 lead on a free throw after Jefferson player Janson Kincer was assessed a pregame technical foul for hanging on the rim.

The Bulldogs came out strong in the first quarter, limiting the Broncos to five points while going on a 5–0 run, resulting in a 10–5 Yellow Springs lead. YSHS sophomore DeAndre Cowen was key, scoring seven out of the team’s first 10 points.

The Bulldogs’ offensive streak continued into the second quarter, as they scored four more unanswered points. Jefferson immediately fought back, however, promptly netting 10 points to take a 15–14 lead. The two teams then lapsed into a defensive battle, with Yellow Springs ultimately emerging with a two-point lead going into halftime. YSHS ended the half with considerable momentum, having limited the Broncos to a mere 19 points. Their game plan was working.

Something shifted at the beginning of the 3rd quarter, however. The Broncos hit their stride, exploding for 10 points before the Bulldogs knew what had happened. A two-point YSHS lead flipped to an eight-point deficit in the span of a few minutes.

To compensate, the YSHS players began playing with extra urgency and hustle. However, this decreased their focus, which ultimately resulted in five turnovers, all of which Jefferson converted into points.

Turnovers were a key factor in Jefferson’s run, according to YSHS assistant coach Phillip Renfro.

“When you turn the ball over, you’re essentially trading 2 for 1,” he said, implying that a turnover eliminates the opportunity to score while also giving the opposing team the ball.

Yellow Springs had a chance to gain back momentum after an impressive dunk by Cowen, but Broncos junior Janson Kincer immediately responded with a crucial three-point shot as the quarter ended.

Jefferson controlled the tempo in the fourth quarter, eventually winning the game 64–50. Cowen led YSHS with a career night, finishing with 30 points.

*Diamond is a YSHS senior interning with the News.

In other Bulldog sports—

The YSHS girls basketball team improved their season record to 11–3 (5–3 in the MBC) with two wins and one loss over the week. The current win total, 11, matches the final win tally at the end of last season.

On Monday, Jan. 6, the Bulldogs travelled to Troy Christian where they lost a tough one, 52–29. Angie Smith had 24 points and six rebounds in the loss, Haneefah Jones added five points and seven rebounds and Annlyn Foster and Aaliyah Longshaw each brought down six rebounds.

YSHS then hosted Jefferson on Thursday, Jan. 9, and bested the visitors 67–21. Two Bulldogs had career highs on the night — Jones and Corinne Totty, who each ended the game with 15 points. Both also brought down eight rebounds. Smith had 20 points on the night, in addition to nine assists and nine rebounds and Foster finished with 10 points and 14 rebounds.

At West Carrollton on Monday, Jan. 13, the team won a close one, 41–35. Smith’s 20 points and nine rebounds contributed to the victory. Longshaw added 10 points and 11 rebounds and Jones and Foster finished the game with nine rebounds apiece.

The McKinney boys basketball team had a tough week with three contests against some top-notch opponents. On Monday, Jan. 6, the boys faced conference foes Troy Christian. The seventh grade boys took a loss but put forth great effort before falling 38–30. Alex VanAusdal scored a season-high 15 points while his teammates Kaveeyan Wagner and Landon Harris added 10 and five points, respectively.

The eighth grade boys also lost to a hot Troy Christian team that scored 39 points in the first half alone. The eighth graders kept their heads up and came out more defensively in the second half but could not overcome the deficit from the first half.  Scoring on the evening were seventh grader Wagner with seven points, Brady Baker with five and Kellen Scott with two points.

On Thursday, Jan. 9, the McKinney middle school boys traveled in opposite directions as the eighth grade team took on a conference game against Jefferson and the seventh grade boys traveled to Troy to face the Miami Valley Saints. The eighth grade boys lost an exciting match 24–23. Leading the team scoring was Wagner with eight points. Isaiah Search was next with seven points. Sam Miller added four points while Jake Ortiz-Thornton and Baker each added two.

The 7th grade Bulldogs were outmatched by height in their game and could not keep the Saints from post and points in the paint, losing 53–35. Scoring against the Saints was VanAusdal, tying his season-high 15 points. Harris contributed 10 points while Mateen Sajabi added six. Terrel Robinson and Lucas Price each had two.

Finally, the Bulldogs ended their week at Dayton Christian on Saturday, Jan. 11. Both teams had to endure another loss. The seventh grade boys played with great intensity and tried to let their hard defense lead to turnovers and baskets, however their opponents took the win 46–26. The big defensive efforts by Landon Harris and Alex VanAsudal led Harris to the rim with 12 points and VanAusdal with eight. Wagner added four and Robinson had two.