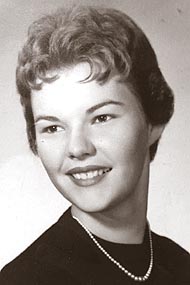 Linda lived for a time in Hillsboro, Ohio, before moving with her maternal grandmother and grandfather, Opal and Henry Blackmore, to Fairborn.  In 1956, her sister, Tamara Morrisette (née Stevens), was born.

Following her graduation from Fairborn High School in 1957, Linda attended Ohio University for a period of time, but returned to Dayton and worked as a secretary at Defense Electronics Supply Center (DESC).

While working at DESC, Linda became acquainted with Patrick K. Peifer from Philadelphia, Penn., who was attending the University of Dayton. Pat and Linda were married in 1962, and began their life together in Fairborn. After the birth of their first son, Linda dedicated herself to being a full-time mother and homemaker.

She and Pat very much enjoyed their retirement together.  They moved in 1994 to Yellow Springs. If she was not visiting with her grandchildren, working with John in his apple orchard or enjoying the country life outside of Yellow Springs, she and Pat were traveling, whether to visit Alex and his family in Phoenix, Ariz., or Chris, who was stationed with the United States Air Force in the United Kingdom, or other destinations.

In addition to her parents, Linda was preceded in death by her step-father, Harry Stevens; and by the love of her life, Patrick K. Peifer, who passed away on May 5, 2019. She leaves behind to cherish her memory her sons, Patrick John Peifer, Alex (Tanya) Peifer and Christopher Sean (Aida) Peifer; grandchildren, Emma (Samuel) Peifer-Burns, Elle Peifer, Nicholas Peifer and Ava Peifer; sisters-in-law, Helen Ortwein and Ann Peifer; as well as numerous nieces and nephews.

A visitation will be held on Thursday, Jan. 23, 2020, from 5:30 to 7:30 p.m., at Jackson Lytle & Lewis Funeral Home, Yellow Springs. A Mass of Christian Burial will follow on Friday, Jan. 24, at St. Paul Catholic Church beginning at 11 a.m. Linda will be laid to rest next to Pat in St. Paul Catholic Cemetery.  In lieu of flowers, the family would like memorial contributions to be made to the American Cancer Society in Linda’s honor. Condolences are forwarded to the family by visiting http://www.jacksonlytle.com.