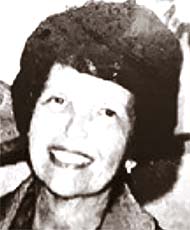 Maxine Margolis Leventhal, aged 97 years, passed away on Saturday morning, Jan. 4, 2020. She died peacefully at 1:10 a.m., surrounded by loved ones at Friends Care Community in Yellow Springs, where she has lived for the last four years.

Born and raised in Dayton, Ohio, Maxine was the daughter of Abraham and Anna Margolis. She had one brother, Sterling, who later took over the family business, Rex Radio. Maxine briefly attended Ohio State University to study business, but left during World War II to work at the Royal Air Force, helping to manufacture the much-needed military parts for our troops. After the war, Maxine met her husband, Fred, at an outing in Springfield, where she experienced love at first sight. The forever-poised Maxine and her streetwise Cleveland boy were a perfect match. Their marriage in 1947 lasted 69 wonderful years. After settling in Springfield, Fred and Maxine lived in an apartment on East High Street before building their only home on Dover Road.

Maxine and Fred had two children: Fern, who presently shares her time between Asheville, N.C., and New York City; and Todd, who lives in Yellow Springs with his wife, Gabriele. Maxine was the proud grandmother of five grandchildren, three step-grandchildren and nine great grandchildren. Maxine was a very active member in the Springfield community for many years, being a feminist before the term was popular. She worked on the Planned Parenthood board, served as President of the League of Women Voters and was President of Temple Sholom and the Temple Sisterhood for several years.

Maxine and Fred were a powerhouse couple, making changes in the community, being a foundation for their families and just loving to be together. Maxine and Fred liked seeing new places, traveling to Europe, spending their 25th anniversary in Israel and taking several cruises with their children. They also joyfully became snowbirds, enjoying over 20 years wintering in Marco Island, where they ate at the same breakfast joint every day, played tennis into their later years and enjoyed the sounds of the ocean. Maxine and Fred also were bridge partners into their 90s, playing with old friends and making new ones. A graceful and reserved woman, Maxine often took a traditional role of being the woman behind the man. She, nevertheless, provided the foundation from which a community philanthropist and two strong children grew. With a sharp wit, amazing perseverance, strong opinions, fantastic organizational skills and a sense of duty to the world at large, Maxine lived a full life — a life that always revolved around her family, friends, Jewish culture, community and, of course, her cats.

A memorial service with a reception to follow will be held in Maxine’s honor on Feb. 21 at 1 p.m. at Temple Sholom in Springfield. Any donations in Maxine’s name should go to Ohio’s Hospice of Dayton, Planned Parenthood of Springfield or Temple Sholom. Online expressions of sympathy may be sent through
http://www.littletonandrue.com.