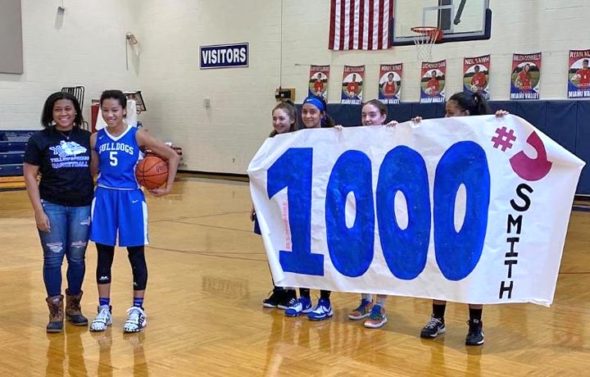 Sophomore Angie Smith, second from left, scored her 1,000th career point during an away game against The Miami Valley School on Saturday, Feb. 8. Pictured during a celebration at the high school, she stood with her sister Liz Smith, a YSHS grad who was a basketball standout during her high school years. (Submitted Photo)

The Yellow Springs High School girls swim team competed in sectionals on Saturday, Feb. 9, in Mason. Avery Reeder advanced to the District Qualifier meet in the 500m freestyle and will swim on Friday, Feb. 14, at Miami Oxford.

Angie Smith, who was nearing 1,000 career points as the end of the season drew near, racked up her 1,000th point during an away game against Miami Valley on Saturday, Feb. 8 — one of two games in which the Bulldogs were the victors.

With a mere five seconds left in the game, both teams were tied, 31–31. Senior Linkhart took a charge, and Smith was fouled, making two freethrows to give the Bulldogs the lead.

The Bulldogs racked up yet another win on Feb. 8, besting Miami Valley 41–10. Smith scored 12 points and completed five assists, and Jones scored eight points, while also holding Miami Valley’s Katie Campbell — who has averaged 15 points this season — to seven points with her defensive plays. Annlyn Foster and  Linkhart both had nine rebounds, followed by Phillips with five rebounds.

Smith’s teammates celebrated her 1,000-point accomplishment with a banner in her honor.

The Bulldogs finished the regular season 18–4 and 9–3 — third place — in conference play.

On Tuesday, Feb. 4, YSHS varsity boys played Emmanuel Christian Academy, one of the best teams in the area, and fell 65–20. Cameron Harris led the way in scoring, with eight points for the Bulldogs.

The next night, Feb. 5, the Bulldogs played at The Miami Valley School and were again defeated, this time 45–27. Senior Romel Phillips scored 13 points and had 11 rebounds for a great double-double.

On Friday, Feb. 7, the Bulldogs went head-to-head with Troy Christian at home and suffered another loss, 56–26. No stats were up for the Troy Christian.

The Bulldogs held their senior night on Tuesday, Feb. 11, at home against Greenon High School; scores were not yet available at press time.

The McKinney Middle School boys basketball team has been hampered with illness throughout the last half of the season. This past week, the seventh grade team had to forfeit two games because they did not have enough healthy players to participate. However, the healthy players were able to combine and roster a team to compete at the eighth grade level. On Feb. 3, the boys faced Emmanuel Christian at home and were in control to start the game, jumping out to a halftime lead of 19–16. However, a big fourth period by Emmanuel led YS to drop the match, 32–28. Brady Baker had an impressive game scoring 12 points while Landon Harris added nine. Sam Miller added five points and Kaveeyon Wagner added two.

On Thursday, Feb. 6, the eighth- grade boys faced off against a talented Troy Christian team and lost the game, 61–20. Leading the scoring on the evening for the Bulldogs was Wagner with six points. Baker added four points and Thornton and Miller each supplied three. Harris and Alex VanAusdal added a bucket each as well.

On Saturday, Feb. 8, two fourth-period three-pointer buckets by Harris and Miller proved big for the Bulldogs as they defeated The Miami Valley School, 32–29, for a solid victory to end their regular season. This was an exciting game that showed the maturity achieved by the players as they managed the clock during the last minute of the game to keep their lead. Harris was the leading scorer for the afternoon with nine points. Miller contributed seven to the win and Isaac Grushon had five points and also shined defensively by out rebounding his opponents. Wagner had four points; Isaiah Search added a bucket and a free throw, while VanAusdal and Thornton added two each to the victory.

The Bulldogs will begin tournament play on Feb. 10.

The game started well, with Longshaw winning the tip, but Emmanuel scored first. Navaeh Smith scored first for the Bulldogs to tie the game at two each. Babb and Longshaw also scored two-point field goals, but Emmanuel led after the first quarter, 9–6.

In the second quarter, Babb scored twice again, but so did Emmanuel, so at half time, the Bulldogs still trailed, 13–10. The third quarter was mainly a defensive battle, with each team only scoring once, but Longshaw’s three-pointer, with one second remaining, pulled the Bulldogs to within two, with Emmanuel leading 15–13. The Bulldogs scored first in the fourth quarter off an Anna Smith three-point shot and took a one-point lead; Emmanuel scored again to take back the lead. Babb answered to get the Bulldogs back on top, 18–17, and with two seconds remaining, Anna Smith was not content to sit on the lead and let the clock run out, and buried a long two-pointer from the left corner to make the final score 20–17.

Longshaw had a big night defensively as she had four blocked shots, five steals and six rebounds. Navaeh Smith and Babb each had a steal. Navaeh Smith and Herring led with seven rebounds each; Zinger, Babb and Meekin had three each, Anna Smith had two and Stacy had one. Babb forced three jump balls, and Herring forced one.

On Thursday, Feb 6, the team played again at home, this time hosting the Eagles of Troy Christian. Starting for the Bulldogs were Navaeh Smith, Stacy, Babb, Longshaw and Anna Smith. Contributing off the bench were Herring, Chloe Bayard, Gini Meekin and Tiger Collins. Coach Alan Harris was away, so Assistant Coach Rob Slaven took the helm as head coach for the game. The Bulldogs scored first off of a two-pointer by Longshaw, and finished the first quarter with a 5–4 lead. Longshaw also sank a free-throw, and Babb threw in a two-point field goal. In the second quarter, Troy pulled ahead by two to lead 9–7 at the half. The Bulldogs earned two points in the second quarter from a pair of free throws by Navaeh Smith.

In the third quarter, the Bulldogs lit up the scoreboard with 14 points and pulled ahead of the Eagles with a 21–12 lead. Babb and Herring each had a three-pointer and a two-point field goal, and Navaeh Smith scored on two -point field goals.

In the fourth quarter, both teams scored four points. Navaeh Smith had a two-point basket, Longshaw sank a pair of free throws, and the Bulldogs prevailed 25–16, with Meekin blocking Troy’s last shot out of bounds as the buzzer sounded. The Bulldogs out-rebounded Troy 34–18, and had 17 steals to Troy’s three.