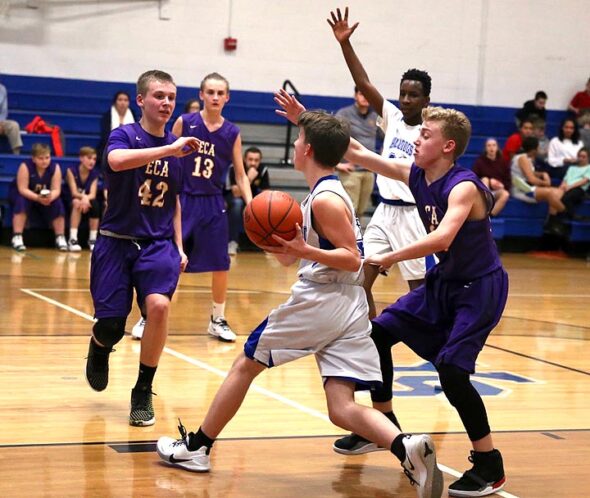 McKinney boys basketball player Brady Baker went for a layup while Kaveeyon Wagner got open in the paint during the team’s Feb. 3 match against Emmanuel Christian Academy. Baker scored 12 points in the home loss. (Submitted photo by Jyoti Miller)

After years of losing records, including just two wins in the 2016 season, the team drove to an 18–5 record this season.

The team also finished an impressive 9–3 in the Metro Buckeye Conference, good for third place.

Unfortunately, their post-season hopes were dashed on Tuesday, Feb. 18, in a close 49–41 loss to Springfield Catholic Central in the sectional semi-finals.

The girls team should be a force for years to come, as most players are due to return.

At the conclusion of the regular season, several YSHS girls basketball players were commended with a slew of awards.

In the end, Smith finished as the top scorer in the league, averaging 21.8 points per game. She also led the league in steals (4.9/game), and came in fourth in assists and fifth in blocks.

Second team MBC honors were given to Longshaw, also a sophomore, and Haneefah Jones, a junior. Junior Kayla Ross won the Sportsmanship Award.

Trying to pick up its first Metro Buckeye Conference tournament win, the eighth-seeded McKinney Middle School boys basketball team got off to a good start last Saturday, but couldn’t hold on in a 39–19 loss to the No. 1-seeded Legacy Christian in a game held at Miami Valley School.

The Bulldogs came out strong with a game plan, and were down only one point at the end of the first period, but Legacy Christian took a 23–10 halftime lead and stretched it the remainder of the game.

The Bulldog boys definitely had their share of ups and downs this season, but it was evident that as the season went on, they came together as a team and showed tremendous growth.

Leading the Bulldogs in their last game of the season was seventh-grader Kaveeyon Wagner, with eight points. Seventh-grader Landon Harris had four points and fellow seventh-grader Lucas Price had a three-point basket. Eighth-graders Isaac Grushon and Kellen Scott added two points each. The Bulldogs’ opponent, the Legacy Christian Knights, went on to be the eventual Metro Buckeye Conference Middle School Champion.

Reeder, competing in the 500-yard freestyle, finished with a time of 6:19.38. It was not good enough to earn her a ticket to states, however.