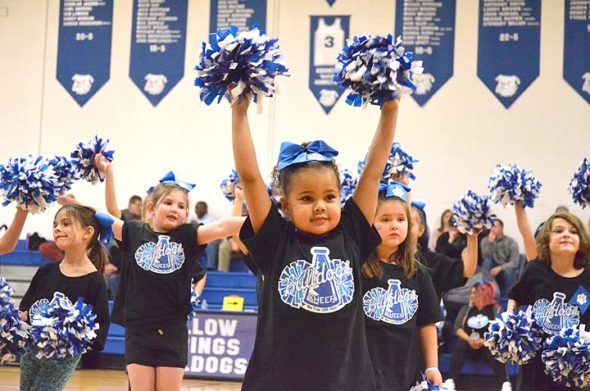 “Everybody contributed to getting that second place,” coach Angela Mangen said. “Everybody won points. Overall, it was a very solid, team effort.”

The 200 free relay team of Andrea Reeder, Avery Reeder, Annlyn Foster and Natalie Galarza, made first-team all conference with a time of 2:02.6.

“She just killed it,” Mangen said.

The team next heads to sectionals Saturday, Feb. 9, in Mason.

Angie Smith was the top scorer, with 28 points, nine steals and eight rebounds.

The Bulldogs’ contest against Tri-County North on Saturday, Feb. 1, concluded 52–17.

Smith, a sophomore, is now only 25 points away from achieving a 1,000 point total.

The Bulldgos have a big home game versus Troy Christian on Thursday, Feb. 6. If Smith achieves her 1,000th point, the team plans a celebration.

The next night, Saturday, Feb. 1, the Bulldogs traveled to Milton-Union to face a well-rounded upper division team, falling 84–27.

The next home game is Friday, Feb. 7,  against Troy Christian.

On Monday, Jan, 27, the seventh grade boys team traveled to East Dayton Christian for the opening game of a doubleheader with the varsity men’s team.

The middle school squad showed it could play a complete game against a quality opponent with a 29–24 victory over the Rams.

The game saw great defending in the paint by Alex VanAusdal and Terrel Robinson; perimeter defending by Kaveeyon Wagner and Landon Harris led to some quality turnovers and offensive points. Leading the Bulldogs to victory was Harris with 15 points, Wagner with 10 points and VanAusdal with four points.

The focus now will be on getting the teams healthy and ready for the last few matches of their season before the tournament begins.

The game started well for the Bulldogs as Longshaw won the tip. Navaeh Smith then got Yellow Springs on the board first with a layup 10 seconds into the first quarter, which ended in a tie 6–6.

The second quarter saw the teams playing hard, with EDC hanging on to a small lead, ending the quarter with 16 points to the Bulldogs’ 14.

The second half opened with Longshaw tying the game at 16. An exciting quarter followed with both teams fighting to take the lead, concluding the quarter with another tie, 21–21.

The battle continued into the fourth quarter, with Yellow Springs up 27–24 with 2:29 to go.

As the final minutes ticked down, Babb launched a three-pointer that proved good. The crowd erupted as the score went to 30–24 in the Bulldogs’ favor.

The game saw eight ties, and Yellow Springs broke seven of them. They were down by six points in the second quarter, but outscored EDC 24–10 from that point on.

The Bulldogs followed the win with a tough home-court loss against Dayton Christian on Thursday, Jan. 30.

The game started off well with Longshaw winning the tip and Stacy getting the ball, but the Bulldogs could only get one point on the board by the quarter’s end, with the score 9–1 in DC’s favor.

DC scored 10 more points, and despite many close attempts, YS did not score again. The final score was 33–5.