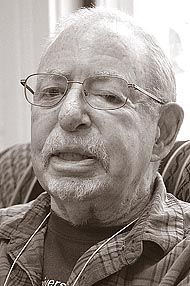 Joel was born on Aug. 17, 1935, in New York City and began a long career in journalism while still in high school and college as news editor and editor-in-chief, respectively, at those school’s newspapers. Joel graduated from Queens College in 1957 and the Columbia Graduate School of Journalism a year later. While studying at Columbia, he wrote the first of several articles for the Sunday magazines of the NY Herald Tribune and Journal American. He went on to jobs at CBS-TV News, United Press, the morning newspaper in Hawaii and a 27-year stint as a senior editor of a national business magazine.

His career was largely influenced by being born into a journalism family. He was the son of the late A.I. (Abe) Goldberg and Victoria Beebe Goldberg, both writers who met while high school students in Steubenville, Ohio. Early on, Abe reported for the Columbus Dispatch and, shortly before Joel was born, joined the Associated Press in New York, necessitating the first of many moves in the U.S. and Europe for the family.

During World War II, while Abe served as an AP war correspondent in Europe, the rest of the Goldberg family, now including a younger brother, Ethan, and one grandmother, moved to Blanchester, Ohio, to be nearer relatives and old friends. After the war, the family lived in Paris and Prague for three years. When Joel’s father was named a United Nations correspondent for the AP, the Goldbergs returned to the New York area in time for Joel to start high school in Bayside, Long Island.

Joel was drafted by the U.S. Army in 1959. He was trained first as a howitzer gunner, but served most of his tour as a public information specialist at Schofield Barracks, Oahu. After his military service he joined the Honolulu Advertiser, Hawaii’s morning newspaper, as a reporter for another two years.

In 1964, after returning East, Joel joined the editorial staff of Medical Economics, a New Jersey-based business magazine for physicians, eventually becoming managing editor of a new edition he developed for surgical specialists.

Joel moved to Ohio in 2001. A lifelong Unitarian, he quickly joined the Unitarian Universalist Fellowship of Yellow Springs, taking on numerous volunteer responsibilities, including four years on the Fellowship’s executive board. He also volunteered with the local chamber music society and Home, Inc. The rewards, he often said, were making many new friends.

Joel H. Goldberg is survived by his partner, Polly Miller; his brother’s widow, Arlene Goldberg, of West Charleston, Vt.; his first wife, June Omura Goldberg, of New York City; and a niece and nephew and their four children.

At Joel’s request, there will be no formal memorial service.