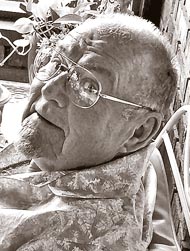 Born in Canton, Ohio, to John Eschliman and Stella Daugherty Eschliman, he had early jobs in high school with a surveying crew, which led to service in the Army Corps of Engineers during the latter part of World War II, where he led a survey crew of 26 in Panama. After his military service, John married Helen Blankenhorn, a friend of his sister Carolyn’s in nursing school, and was one of the married students at Antioch College continuing their education post military service.

A co-op job at The Woolpert Company in Dayton led to a professional civil engineering certification and an eventual partnership, in which capacity John made his mark on the Yellow Springs infrastructure, designing the water treatment plant and water towers, among other projects. During his time in Yellow Springs he developed a passion for golf and was instrumental in getting the Greene Country Club up and running. After early retirement, John and Helen retired to Mt. Plymouth, Fla., in close proximity to a golf course, where they spent several decades until Helen’s death in 2008.

John was a man of boundless curiosity and tried many hobbies, including fishing, winemaking, gardening, birdwatching, tropical fish and photography, to name a few. His childhood during the Depression as well as his engineer’s mind made him ingenious in repair solutions. He was a natural teacher, having taught engineering classes during his Army service and at the University of Dayton, where he was encouraged to pursue the studies required for tenure-track professorship. Although his health was failing in the last years of his life, he never lost a joyous spirit and generous approach to life. The ultimate host, he loved to entertain, and many will fondly remember the corn roasts, Christmas Eve eggnog open houses, and the numerous poker club and bridge club sessions.

John is survived by his daughter, Becky Eschliman, of Yellow Springs; sons, David Eschliman, of Colorado Springs, Colo., and Tim Eschliman, of American Canyon, Calif.; and four grandchildren. In lieu of flowers, memorial donations may be made to the Antioch College Glen Helen Fund. An online guestbook is available at http://www.hardenpauli.com. A memorial event is planned for the summer.