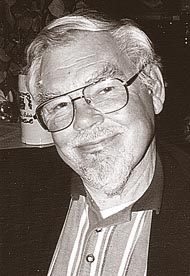 Born and raised in Dayton, Barney spent summers in Cleveland.  He served in the Navy during the second world war in the south Pacific.  Returning to Dayton, he completed a BA degree courtesy of the GI bill at the University of Dayton and the Dayton Art Institute.  It was at the Art Institute where he met and married Dorothy Blakeley (Dottie Moore).  They moved to Yellow Springs in 1955 and raised three sons, Kerry, Chris and Nick.

Barney and Dottie both worked in the graphic arts trade in Dayton and were actively involved in the visual arts community.  Barney and Dottie shared a love of travel and music, particularly traditional jazz, delighting in their sons Chris and Nick performing in the Rambler Classics and later Dave Greer’s Classic Jazz Stompers.

In addition to his sons, Barney is survived by daughters-in-law Sally Radell (Kerry) and Nadine Daugherty (Nick);  grandsons Nathan and Brendan Moore and  Samuel and Jackson Moore; and great-grandson Theodore Moore.

Friends and acquaintances will remember Barney’s friendliness and humor in a life well lived.