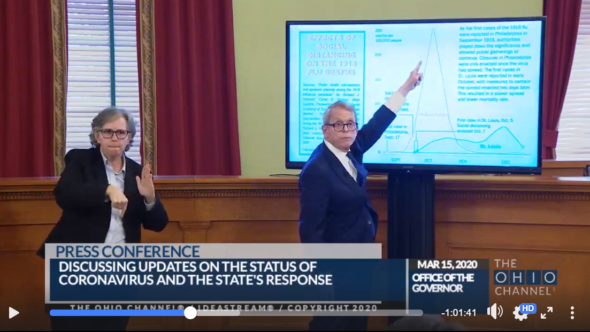 Video still from the March 15 governor's press briefing on COVID-19 in Ohio, live-streamed at ohiochannel.org

“This is the real thing”: Highlights from governor’s March 15 press briefing

All bars and restaurants in Ohio are ordered closed by the state beginning at 9 p.m. Sunday, March 15.

Gov. Mike DeWine announced the closure, by order of Ohio Department of Health Director Dr. Amy Acton, at a press conference this Sunday afternoon. The Sunday conference was not originally scheduled as part of the governor’s daily press briefings.

“All bars and all restaurants will close at 9:00 tonight,” DeWine said.

The order applies to the sit-down portion of restaurants only. Carryout and takeout can operate as usual, DeWine said.

“Carryout food is still allowed and encouraged,” he said.

That means that people can walk into restaurants and pick up food to-go, as well as call for home delivery of food where applicable.

The duration of the order is unknown. DeWine said the closure was developed in consultation with bar and restaurant owners in the state. The proximity of Saint Patrick’s Day, upcoming on March 17, was one factor in issuing the order now, according to DeWine.

He acknowledged the economic impact of the order on businesses and their employees.

“Many small business owners are going to hurt greatly,” he said.

In a later part of the conference, Lt. Gov. Jon Husted announced an executive order to expand Ohio’s unemployment compensation program to cover workers who would not otherwise have access to paid leave. Workers “impacted by the COVID-19 health emergency” will be able to access paid leave. This includes workers under quarantine.

“Those quarantined will be considered unemployed” for the purposes of unemployment relief, Husted said.

The relief also applies to companies that determine they need to shut down for safety reasons, he added.

As part of the executive order, Ohio will waive the one-week waiting period for unemployment benefits that normally applies.

More details are available at unemployment.ohio.gov and by calling 877-644-6562.

Husted also announced that Ohio had qualified for economic injury disaster relief, giving Ohio small businesses and nonprofits access to loans of up to $2 million through the federal Small Business Administration. Details on that program are available at SBA.gov/disaster-assistance or by calling 800-659-2955.

In addition, Husted announced a buyback program for bars and restaurants regarding unopened high-proof liquor purchased for Saint Patrick’s Day and other celebrations. Details are available at Ohio.gov/liqr.

Husted called these measures the “first step” in responding to business disruptions, with more measures forthcoming.

Updates on COVID-19 spread in Ohio

As of Sunday afternoon, Ohio now has at least 37 confirmed cases of COVID-19, up from 26 reported Saturday. In addition, 361 persons are now under investigation at the state lab.

Confirmed cases have been tied to 11 counties. Greene County does not yet have any cases reported by the state.

However, confirmed cases are “just the tip of the iceberg” of the disease’s spread in the state, according to Acton.

She said the state health department was finding it “increasingly hard to get numbers that are accurate because it’s pouring in so quickly.”

Acton urged Ohioans to assume they might be carrying the virus and act accordingly, practicing social distancing and staying home and working from home as much as possible.

“Each and every one of us must suspect that we have it or are carrying” the virus, she said.

The state’s orders and individual preventative measures are necessary to avoid overwhelming Ohio’s healthcare system, Acton emphasized. Those who need to be treated for the virus as well as those who need medical care for other critical issues are at risk if the system is overburdened, she said.

Ohio’s hospitals are preparing for a “hospital surge,” she added.

But Acton emphasized that preventative measures could “greatly decrease these numbers,” alleviating stress on the state’s healthcare system and preventing serious illness and death.

And she sounded a strong note of urgency to Ohioans.

“This is the real thing. This is not a drill. This is the once-in-a-lifetime pandemic and everything each of us does matters,” Acton said.

DeWine said that congregate meal programs at senior centers, a significant source of food for elderly Ohioans, have not yet been closed, but will be. The state is working with local agencies to make sure food gets distributed to elders who take part in those programs, he said.

Regarding school closures, DeWine said that while the state’s mandated closure period is currently set at three weeks, that period “is likely to be extended” to a later date.

DeWine said he had spoken to school superintendents regarding possible extensions of the current closure.

“I have advised that they should be prepared for this to last for an extended time,” he said.

Regarding daycare centers, which have not yet been closed, DeWine said the state will be ordering them closed. He reiterated a previous plea to parents to take their children out of daycare centers, if possible, to slow the virus’ spread.

In response to a question about whether voting in Ohio would be affected, DeWine clarified that voting was not included in the state’s order against mass gatherings. But he added that there would be an additional announcement from Ohio’s secretary of state tomorrow morning, March 16, regarding voting.

Election day in Ohio for the presidential primary is Tuesday, March 17.

In response to a question about statewide curfews, DeWine said he did not anticipate such a measure.

Defending the scope of Ohio’s response, the governor characterized the closures and related decisions the state is making as matters of “life and death.”

“We are dealing with life and death,” DeWine said of the current situation in Ohio. “People will die if we do not make these decisions now.”

At the beginning of the press conference, he contrasted the response of St. Louis and Philadelphia to the 1918 influenza outbreak. St. Louis responded quickly with closures and other measures, he said, while Philadelphia lagged in its response, resulting in many more people falling ill and dying.