Originally published in the May 14, 2018, issue of the News, this obituary has been updated in memoriam of the two-year anniversary of Marie Adams Payton’s death. 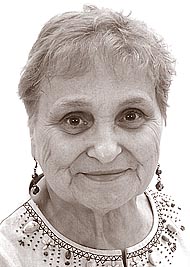 Marie Adams Payton, 88, of Milwaukee, Wis., went home to her Lord on May 5, 2018. Born in Cincinnati, Ohio, Marie grew up in Yellow Springs, Ohio, the daughter of LeRoy “PaPa” Adams and Mary “Gaga” Schooler Adams. “E,” as she was affectionately known, graduated from Bryan High School in 1946 and was a lifelong member of Central Chapel A.M.E. Church, beginning missionary service at the young age of 12, alongside her beloved mother.

Marie married David M. Perry, Sr. on Jan. 5, 1947. To this union a son, David M. Perry, Jr., was born. They lived briefly in Cleveland, moving back to Yellow Springs a year later.

Marie married Charles Payton “Payt” on Aug. 4, 1956, after meeting at Wright-Patterson Air Force Base. To this union a son, Craig M. Payton, and a daughter, Crista Payton, were born. They moved to Milwaukee, Wis., in 1965.

She worked as a secretary, advanced typist and stenographer at Wright-Patterson AFB, Vernay Research Laboratory and Westgate Labs in Yellow Springs, as well as a secretary for Dr. Harry Jerison, Director of the Behavior Research Laboratory at Antioch College. Marie earned her degree in elementary education and library science from Milwaukee’s Alverno College in 1974. She taught at the Alverno Elementary Campus School and was a librarian at Nicolet High School in Glendale, Wis. She took delight in tutoring students who were not achieving their full potential in Nicolet’s Learning Center. Marie left Nicolet after many years to pursue her dream of being an elementary school teacher, accepting a K–5 position with the public schools where she worked until her retirement in 1994. She began working at Elektra Lights and Fans in 1996 and continued her employment there as a bookkeeper for over 21 years until her unexpected death in 2018.

Marie became a member of St. Mark A.M.E. Church in Milwaukee in 1965, immediately joining the Senior Choir (Anvil) Choir, Women’s Ensemble and Mass Choir, and was a past president of the Anvil choir. She also was proud to be one of the original members of the renowned New Jubilee Community Choir, singing first alto. She volunteered with the church food pantry since its inception and organized a prison ministry with the choirs for Taycheedah and Wales facilities during her term as Community Relations President of the Missionary Society. She regularly visited the sick and shut in, helped with vacation Bible school, was a class leader and was active in several church committees. She was a lifetime member of Church Women United and the Geraldine Bradford Missionary Society, never pausing in her efforts to do God’s work by offering service.

Marie held Yellow Springs close to her heart, returning annually to visit family and friends. She was a member of The Victorettes, a group of 13 teenagers united in 1944 by Dorothy Perry Boyce to support the troops. She was proud of their efforts and long-standing friendships and fondly recalled the group being honored to sing for Eleanor Roosevelt. Marie was the youngest member asked to join and was a soloist. She regularly attended the annual reunion of this historic group as well as her Bryan High School annual class reunion. Yellow Springs was always home.

Marie loved to travel, first setting foot out of the country to Europe with her young children after her husband Payt’s sudden death in 1977. Throughout her lifetime, she set foot on all but one continent, including proudly traveling independently to China. Highlights include her journey with friends to Australia and later a missionary trip to South Africa and Egypt. She and her daughter Crista enjoyed exploring all over the United States and Canada. They also ventured to Norway, Iceland, the Galápagos Islands and the Amazon Rainforest.

Marie embraced life and never wavered from her positive and optimistic demeanor. She loved to laugh and was truly a bright light in this world, cherished by all who took the time to know her.

Services celebrating her life and legacy in Milwaukee were held on Saturday, June 16, 2018, at St. Mark A.M.E.Church.

You will forever be missed.