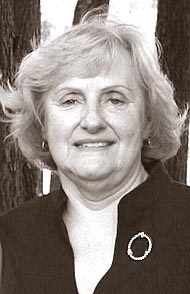 Roberta Kate Holderman Allen, age 75, of Shelton, Conn., passed away on Sunday, April 19, 2020. She was the beloved wife of William (Bill) R. Allen. Born in Joliet, Ill., on June 16, 1944, she was a daughter of the late James Franklin Holderman and Ruth Wills Holderman. She was a longtime resident of Yellow Springs.

Roberta, known as Bertie or Berta to her family, was a lover of books, birds and family. She would take her three daughters on weekly excursions to the local library, bringing home large tote bags of books that were placed on their own dedicated shelf in the house. This habit found a new outlet when she began creating teaching projects at the Children’s Center in Yellow Springs, leaving no stone (or book page) unturned in search of information to bring the subject matter to life. She was unafraid of a challenge and returned to school to get her master’s degree in literature from Wright State after her daughters left for college. Her gift for words was on clear display at the wedding of her daughter, Laura, when she gave a wonderful speech describing her daughter’s peripatetic ways.

In later years, she discovered birding and immersed herself with the same enthusiasm that she had for books. She and Bill traveled all over the United States in search of all sorts of birds, enjoying numerous national parks and monuments, wildlife refuges, state and local parks and nature preserves along the way. They passed the many hours in the car listening to NPR, historical biographies and the soundtrack to “Hamilton.”

Roberta grew up on a farm in Illinois and loved family gatherings. She also loved her four grandchildren, and while she would never admit to having a favorite, we suspect that her only granddaughter might have gently and quietly stolen her heart.

Due to the concerns about social gatherings affecting us all, no services will be held at this time. Arrangements have been entrusted to the Abriola Parkview Funeral Home, 419 White Plains Rd., Trumbull, Conn. Donations in Roberta’s honor may be made to: The Antioch School, to your local library or Audubon Society, or to your favorite park, national, state or local.