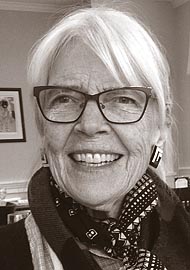 After a full and wonderfully healthy life, Sylvia passed away peacefully on May 7, after suffering a stroke. Born on January 18, 1933, she was 87 years old.

She is survived by her son, Scott, and his wife, Lori; grandchildren, Riley and Cooper; Cooper’s wife, Amy; and Sylvia’s first great-grandchild, Crusoe.

Sylvia grew up in Miamisburg, married and raised Scott while making lifelong friends in Cincinnati. She worked for Catholic Social Services in Northern Kentucky and then, later in life, moved to Yellow Springs with her partner, Byron Dann.

Moving to the Yellow Springs community was one of the best decisions of her life — a close second to finding Byron! Yellow Springs spoke to her and she found a kinship with the people there. Early on, she found her home was with the Unitarians. She and Byron were very active in the Cincinnati Clifton-based fellowship and then with the Yellow Springs fellowship, as well as being active in many other groups too numerous to mention. As we have often heard, especially lately, “everyone knew Sylvia.”

Her family would like to thank those in the community who helped Sylvia and Byron feel so welcome those many years ago, and who nurtured them as they aged and who cared for Sylvia when she was eventually on her own. A special “thank you” to the Yellow Springs Senior Center — you were there countless times when Sylvia needed you over the years!

She found true love, she loved deeply and was deeply loved by many. She will be laid to rest next to her parents at the Hillgrove Cemetery in Miamisburg. Donations may be made in her name, if desired, to The Glen Helen Nature Preserve, 405 Corry St. Yellow Springs, Ohio 45387, or to the charity of your choice.

One Response to “Sylvia Carter Miller”