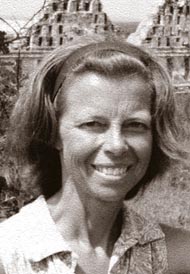 Longtime former resident of Yellow Springs Barbara C. Singleton, 88, died peacefully on May 22, 2020. She spent the last year of her life in Santa Fe, N.M., close to her daughter, Tamara.

Barbara first arrived in Yellow Springs as an Antioch College freshman, finishing her degree in political science at The University of St. Louis. She earned her master’s degree in English literature at Central State University.

In her professional career, Barbara worked as the assistant editor of The Antioch Review, and as a psychiatric social worker at Dayton State Mental Health Center. She also taught English as a second language in Argentina, Bolivia, Brazil, Ecuador, Indonesia, Peru, Taiwan, Tunisia, Turkey, United States and Uruguay — that we know of.

Modest about her achievements, Barbara traveled to almost every country in the world. She was fascinated by intercultural communication. She celebrated the differences in human experience. History, culture, customs and religions of all people intrigued her, and she researched extensively prior to her expeditions. She regularly attended writers’ groups and wrote prolifically about her travels. She was published in The New York Times (twice!), The Christian Science Monitor, various poetry and short story journals and in-flight magazines. Her article “Tengenenge” about the stone sculptors of Zimbabwe won the 2010 Solas Award in the travel writing category. She was honored to have her works preserved at the Wright State University’s Special Collections and Archives.

Barbara was a loyal friend, soft-spoken and unassuming. She enjoyed walking her dog, taking friends out to lunch and attending the local writers’ groups. She would sometimes — for the background to an article — ask quirky questions, such as, “Have you ever stolen a pen?”

Barbara loved to listen to WYSO radio broadcasts every morning.  In lieu of flowers, please give donations to WYSO. For details on a virtual memorial service to be held in the future, please send an e-mail to barbara.c.singleton@gmail.com.