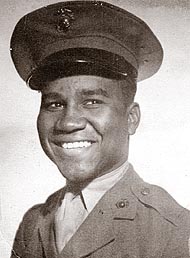 Jonas Elbert Bender was born on June 14, 1925, in New Iberia, La., to his joyful parents, Julia and Rev. William A. Bender. He moved to Tougaloo, Miss., where he grew up. Jonas completed one year of chemistry at Tougaloo College before WWII. He had planned to become a doctor.

He was drafted into the military at 18 and served in the U.S. Marine Corps from 1943–1946. At the time of his draft, the Marine Corps was an unequal and segregated institution. Jonas was one of the first African Americans to be admitted to serve in the corps as a Montford Point Marine. He trained at the segregated Montford Point in North Carolina and went on to serve in the Pacific as a radar operator during the war. Jonas and his fellow 400 surviving Montford Point Marines were finally recognized and honored for their service to the country in the summer of 2012. They were all awarded the Congressional Gold Medal in a ceremony in Washington, D.C. This was a very proud moment for Jonas and the Bender family.

In 1946, Jonas left the Marines and went on to graduate from Tougaloo College, then completed his master’s degree in public relations at Boston University. After his experience in the segregated Marine Corps, Jonas became motivated to spend his life making the United States a more welcoming and inclusive place for all races. He began his career at Knoxville College in Tennessee, where he met the love of his life, Ethel Rembert, who also worked at Knoxville College.

Jonas and Ethel moved to Dayton and had two children, Jerri and Michael. Jonas worked for the Urban League, where he helped people secure jobs and housing. From there, he went on to work for Frigidaire to improve employment practices and then ultimately settled at General Motors for the remainder of his career, working in human resources to continue this important work.

Jonas loved the Lord and was an active member of Central Chapel AME Church. He joined Ethel in heaven on Saturday, May 30, 2020 after a long, happy life full of love and accomplishment. He will be dearly missed by his family: daughter, Jerri Harrison, who lost her loving husband, Peyton, earlier this spring; son, Michael Bender (Tammy); grandsons, Brandon Harrison (Starlette),  Jordan Harrison, Adam Bender and Ryan Bender; and great-grandchildren Judah, Micah and Zainah Harrison.

A visitation service for Jonas Bender will be held on Friday, June 5 at Central Chapel AME Church, 6–7 p.m. We kindly ask that you wear a mask for this service and social distancing measures will be in place. Thank you for considering everyone’s health during this trying time.

Due to the COVID-19 pandemic, a private family service will take place at Forest Glen Cemetery on Saturday, June 6. Arrangements entrusted to Porter-Qualls-Freeman Funeral Home.