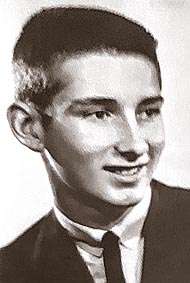 Byron was born in Marion, Ohio, on November 27, 1945. He moved to Yellow Springs at age 6 from Cincinnati with his parents, Guy and Wilma, and siblings, Gary and Vicki.

Byron graduated high school in 1963, the last class to graduate from the old Bryan High School building.  He attended the School of Architecture at the University of Cincinnati. His early work experiences in urban design included time at The Architects Collaborative (TAC), one of the most well-known and respected firms in the world, founded by Walter Gropius, the father of the modern Bauhaus movement, and located at Harvard. Also while in Cambridge, he worked with renowned Spanish architect Jose Luis Sert, Dean of Design at Harvard.

Byron later moved to his beloved San Francisco Bay Area to evolve his career in modern architecture and urban design.  It was also there where he began his lifetime interest in cycling and birding.  Byron retired to Yellow Springs in 2009, serving briefly as a member of the Township Planning Board.

Friends and family will miss his wit and charismatic personality; his storytelling and his bright mind as a self-taught computer whiz and avid reader; his penchant for maps and navigation and road trips; his deep interest in local geography and history; his appreciation for modern architectural design; and his love of birding and cycling.  Byron never complained as he courageously traveled a difficult journey first with Multiple Myeloma and then with Parkinson’s.

A memorial service and celebration of Byron’s life will be held in Yellow Springs in the spring of 2021. If you are interested in attending, please contact his sister at 352-235-0894.  Byron’s family would like to thank Theresa and Rick Foster for their dedication and loving care of Byron in their own home during the last two years.