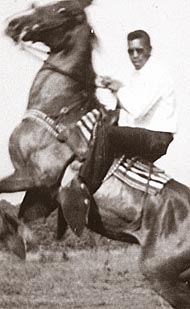 Mike was born on Aug. 18, 1939, in Cedarville, Ohio, to the late Marion and Lucille Peterson. He was a loving husband, father, grandfather, great-grandfather, brother, uncle and friend.

Mike was an avid horseman. He was a successful professional harness racer for more than 40 years, along with his brother. They started the Yellow Springs Riding Centre with Louise Soelberg in 1960, where Mike taught riding lessons. Mike was a basketball enthusiast and coached his son Bryan’s peewee basketball team, which became the only team in Yellow Springs history that went to state championships, in Bryan’s senior year.

In addition to his parents, Mike was preceded in death by his great-grandson, James Michael Peterson IV; sisters, Mary Ellen, Janette, Doris, and Ruth; and brother, Robert J.

The family will receive friends on Friday, June 26, from noon to 2 p.m., at Newcomer Funeral Home in Beavercreek. The funeral service will begin at 2 p.m. at the funeral home. To share a memory of Mike or to leave a special message for his family, visit http://www.newcomerdayton.com.