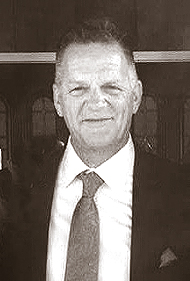 Patrick M. “Pat Butch” Butcher, of Fairborn, passed away peacefully, surrounded by his family, on Friday, June 26.  He was 59.

Pat was born April 12, 1961, in Greene Co., the son of the late George Jr. and Donna (Porter) Butcher. He was the owner of P&B Electric, a position he enjoyed, and he appreciated the many solid relationships he made over the years. Along with his employees, whom he considered family, his company has grown to become the premier commercial electrical services provider in the region. First and foremost was his family, and they could always count on him to be their biggest supporter.  His infectious personality and generosity made an impact on everyone he came in contact with and that, along with the love he showed to all, will be his lasting legacy.

His hobbies included spending time with family and friends at Indian Lake and riding his motorcycle. He was a member of the Fairborn Area Chamber of Commerce and the Free and Accepted Masons, Springfield lodge.

The family will receive friends on Monday, July 6, from 3 to 7 p.m., at the Belton-Stroup Funeral Home in Fairborn. A Mass of Christian Burial will be held on Tuesday, July 7, at 10 a.m., at the Mary Help of Christians Catholic Church in Fairborn, with Father Thomas Nevels as Celebrant. Burial will follow at the Byron Cemetery.