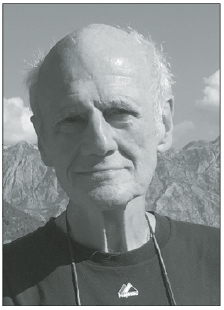 William Brian Maughan, sculptor and Yellow Springs resident for his last 14 years, passed away peacefully at Ohio’s Hospice of Dayton on Aug. 6, 2020, with his wife, Marie, and two sons, Brook and Anthony, by his side.

Brian was born Feb. 14, 1942, in Calgary, Alberta. At the age of 10, he moved to Montana with his parents, Grace and Marlin Maughan, and his older brother, David. As a teenager there, he made lifelong friends in Glacier National Park fighting white pine blister rust with the forest service.

From age 19 to 20, Brian hitchhiked around Europe. While there, he experienced a profound cultural awakening that engendered his lifelong devotion to art. Though a prodigious reader later in life, Brian suffered from dyslexia, and did not read his first book until the age of 18. He attended Whitman University on a football scholarship, then finished his education at the San Francisco Art Institute, where he focused on creating large, abstract, welded steel sculpture, and earned his MFA in 1968. He met and married his first wife, Marilyn Roselius, there, and over the next several years they lived in Manhattan, where he studied philosophy at Columbia University; then Paris, Majorca and Montana, before returning to the Bay area, where his first son was born in 1973. In 1976, they returned to Manhattan, where Brian restarted his career as a figurative sculptor, and where his second son was born in 1980.

In 1987 he moved to Charlottesville, Va., where he spent the next decade as an influential and popular member of the local artistic community. It was there that he met his second wife, Marie Hertzler, when her friend signed her up as a student in one of Brian’s studio art classes.

He moved back to New York (his favorite) City with Marie in 1997, and they lived there in the East Village until they moved to Yellow Springs, Ohio, in 2006. Here he made many wonderful new friends, enjoyed Friday night music and dancing at the Emporium with Marie, and took full advantage of living a block away from the Yellow Springs Brewery, another of his favorite locations.

Brian’s favorite artistic subjects included Native American and western mythological figures. His artistic legacy also includes bronze portraits of President Jimmy Carter, Hank Aaron, Bart Starr and Bob Uecker, amongst other public figures, as well as many equestrian portraits and sculptures. His three bronzes made during the 2013 Yellow Springs Bronze Symposium stand on a small plaza between Mills Park Hotel and the Oten Gallery. His current project, a life-size bronze of Yellow Springs philanthropist Wheeling Gaunt, was in progress at the time of his death.

Brian was a wise and kind man, quick with a joke, a wonderful father, husband and teacher, and a great lover of life, art, philosophy and people. Brian follows his parents and his brother David in passing, and is survived by his wife, Marie Hertzler; his sons, William Brook and John Anthony Maughan; and his grandson, William Marlin Maughan. He was greatly loved and will be greatly missed by them and many others.

Brian will be cremated and his ashes returned to many of the places he knew and loved. Memorial contributions may be made to the Southern Poverty Law Center or the Wheeling Gaunt project through the Yellow Springs Community Foundation.