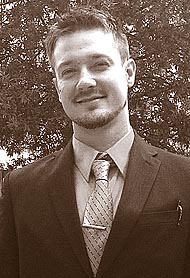 Evan Steven Creditt, born Sept. 23, 1986, will be remembered by many as a curious person who loved learning and tinkering with everything. He took things apart not only to fix them, but also to understand how they were built. Evan looked up to influencers Nikola Tesla and Albert Einstein. Evan was a lover of all things music. He spent hours playing the guitar and listening to bands like Old Crow Medicine Show. Evan took pride in his work and was honored to be employed at both Ohio State University and the University of Kentucky. Although Evan had lots of interests and passions, his greatest love was for his dog, Hobbes.

Evan was preceded in death by grandparents, Joe Sibley, Barbara and Bob Burba and Glenn Creditt; and stepbrother, Levi Bittner.

Join us as we gather to celebrate the life of Evan Steven Creditt on Saturday, Sept. 26, 1–4 p.m., at the Clifton Shelter, located at 100 State Route 343 in Clifton, behind the old Clifton School on Clay Street.

We hope you will come and share your memories of Evan with us.