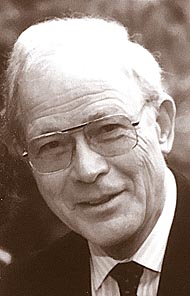 It is with deep sadness and regret that the family of Kenneth W. Kennedy, age 92, announce Ken’s death on Thursday, July 30, 2020. Ken survived a heart attack in January, but could not recover from complications of contracting COVID-19. Ken and wife, Mary Joan (MJ), were residents of Yellow Springs for 59 years, until they moved into a senior living community in Illinois in 2017.

Ken was born on May 8, 1928, in Godfrey, Ill. to Chesley and Bertha (Schmidt) Kennedy. He received his B.S. in science from Murray State, Murray, Ky., in 1952. Ken took graduate courses in chemistry from Wayne State in 1955. Then in 1965, Ken received an M.A. in human anatomy from the University of Michigan, with graduate study in physical anthropology and zoology. He received a Ph.D. in engineering anthropometry — the study of measurements and proportions of the human body — from Union Graduate Institute in 1976.

Upon graduation from Murray State in 1952, he received his draft notice to serve in the Korean War. He was drafted into the Army and shipped off to Ft. Riley, Kan. The Army enrolled Ken in their Leadership School to groom him as an officer, but Ken declined as he did not desire a career in the military. Pvt. Kenneth W. Kennedy served in Company H, 2nd Battalion, 5th Cavalry Regiment. Due to his typing skills, he was assigned as company clerk. Company H served in Pusan and Chitose, South Korea.

Just before starting army basic training in March of 1952, Ken met Mary Joan Kausch, who was a student at Monticello College in Godfrey, Ill., now Lewis and Clark Community College. MJ was engaged to another young man at the time. But MJ’s good friend, Blanche, met Ken one evening, and immediately knew she had to intercede. Blanche burst into MJ’s dorm room, telling her she had just met the man MJ was going to marry and that MJ needed to come with her immediately. So, Blanche introduced MJ to Ken — in front of his date — and, as they say, “the rest is history.” Our family thanks you, Blanche! Ken and MJ were married on Thanksgiving Day, Nov. 27, 1952. A few days later Ken was shipped off to Korea.

Ken accepted a position at Wright Patterson Air Force Base in the Armstrong Aerospace Medical Research Lab. He worked there as a civilian Research Physical Anthropologist from 1958 to 1986. During his time at the base he designed and proofed 2D male and female Engineering Design Manikins representing U.S. Air Force pilots (U.S. Patent 4,026,041). Ken derived conventional, variable and low-profile aircraft crew station design geometries to achieve body size accommodations. These were used in the design of cockpit reach capabilities of pilots for many military aircraft. Ken was mentioned in an article on the space program in the April 27, 1962 issue of Life Magazine. They featured his yardstick palisade device, which positioned pilots wearing inflated space suits within a mock-up of a cockpit seating. This device provided reach capability measurements that were used in the design of space capsule cockpits.

Upon retirement, from 1986 to 1990, Ken worked as a senior research scientist for Universal Energy Systems, Inc. in Dayton. While at UES, Ken performed anthropometric and biomechanic analyses of all-terrain vehicles for the Consumer Products Safety Commission. From 1990 to 2000, Ken worked as a consultant for the USAF as a specialist in anthropometric and biomechanical analyses of aircraft crew stations.

A partial list of Ken’s 50-plus publications can be found online at http://www.humanics-es.com/KennethKennedyCockpitAccomodation.pdf. Ken was passionate about his field of study and always said he never felt like he worked a day in his life. He chose to live in Yellow Springs initially because the sun would be at his back driving to and from Wright-Patterson Air Force Base!

Outside of work, Ken loved gardening, classical music, 1940s Big Band music, home design and improvements, managing his blog titled “Dr. Evil,” genealogy and bread baking. He had an interest in authentic Irish dishes and put together a collection of recipes he gathered from his correspondence with top Irish restaurant chefs. He compiled this mini-cookbook for his family. He also loved reading, his favorite author being J.R.R. Tolkien. At age 86, with very little prodding from his granddaughter Carleigh, they got tattoos together. Ken’s right upper arm was adorned with the evil eye of Mordor surrounded by the names of protagonists Gandalf and Frodo.

Ken was preceded in death by his three brothers: Clarence, Bob and Maurice. Ken is survived by his wife, MJ (Mary Joan Kausch), to whom he was married for 67 years. They have three children, six grandchildren and one great-grandchild. They are daughter, Mimi (Dana Solt), of Mt. Prospect, Ill., and grandchildren, Ellen and Derek; daughter, Kim (Jim Boucher), of West Jefferson, Ohio,  grandchildren, Katherine and Louis, and great-grandson, Benjamin; son, Chris, of Delaware, Ohio, and grandchildren, Ethan and Carleigh; honorary daughter, Niki (Bob) Taylor; and honorary granddaughter, Crystal (Eric) Mayer.

Celebration of life arrangements will be made at a later date, once it is safe for family and friends to gather. Ken donated his body to The Anatomical Gift Association of Illinois. After two years, Ken’s cremains will be returned to the family.

Donations can be made to one of Ken’s preferred organizations: The Environmental Defense Fund, which protects the monarch butterfly and other species from habitat loss.

One Response to “Kenneth W. Kennedy”