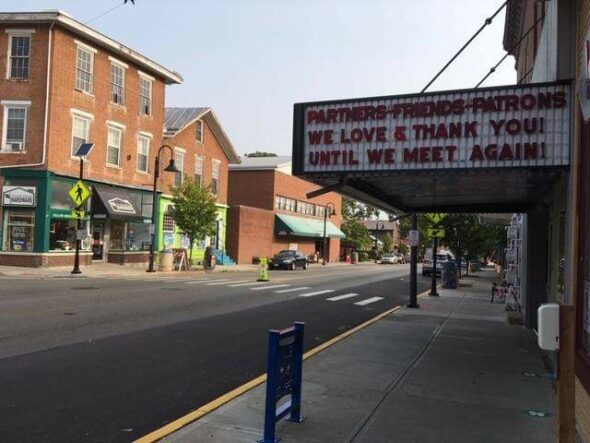 On Tuesday morning, Sept. 15, the Little Art Theatre's marquee displayed a note of gratitude after closing again following its Monday night screening. The Little Art's board of directors made the decision after low attendance over the last eight weekends of the theater's operation, and plan to reopen the theater again sometime in 2021. (Photo from Little Art Theatre Facebook page)

Little Art to close again until 2021

On Monday, Sept. 14, the Little Art Theatre’s board of directors announced that the theater would again undergo a temporary closure in response to the ongoing pandemic, with that evening’s screening of Werner Herzog’s “Nomad: In the Footsteps of Bruce Chatwin” as the final show for at least the rest of the year. The theater had reopened on July 24 after initially closing in mid-March.

In a press release this week, the nonprofit theater’s board of directors cited low attendance as the primary reason for the second closure. The theater’s reopening provisions had anticipated smaller crowds, reducing operation to Friday–Monday. Additionally, the maximum occupancy of the auditorium had been reduced by half in order to keep patrons physically distanced. However, returning patron numbers were consistently much lower than the new maximum occupancy, and the board stated that the revenue from ticket and concessions sales during its eight weekends of renewed operation has not been sustainable.

“Staying open [would risk] burning through the reserves of the nonprofit organization,” the press release stated. “The board of trustees’ responsibility to this venerable cinematic institution means that we must act to protect and preserve the theater for the future.”

The board stated that reopening preparations had been “thorough” — the theater required masks from all patrons and staff and enacted extra cleaning measures — but that it “did not anticipate the public’s discomfort with in-person screenings in the current global pandemic, nor the continued rates of infection in the region.”

Staff were notified of the theater’s closure in a meeting with board members and Executive Director Jenny Cowperthwaite prior to the release of the public statement. Until the theater reopens, most staff have been placed on indefinite furlough.

The public statement did not include an anticipated reopening date, but did make it clear that the theater’s closure is intended to be temporary and that the board will continue to monitor the ongoing pandemic, eyeing some time in 2021 for reopening.

“The board wants to express its gratitude to the Little Art’s wonderful and hardworking staff and volunteers who made screening films in recent weeks possible and safe, and to loyal members and partners who continue to support the theater,” the press release stated. “We look forward to seeing you at the movies sometime next year!”