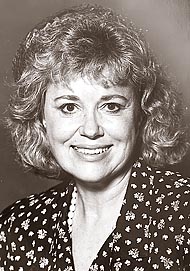 Bonnie was born April 4, 1942, in Church Hill, Tenn. She was an alumna of Berea College in Kentucky, where she graduated in 1964 with a BA degree in history and political science. Bonnie was a former longtime resident of both Yellow Springs and Jacksonville, Fla.

Bonnie served her country for 20 years as an awarded outstanding career civil servant with the U.S. Air Force at Wright-Patterson Air Force Base. She retired in 1994 as Chief, Command and Control Systems Directorate, notable. Her work involved managing a program (CAP) providing support to enable employees with disabilities to achieve their full potential.

While residing in Yellow Springs, Bonnie raised two daughters. She was also involved in several local theater groups, including Center Stage and Fairborn Playhouse, both acting and fundraising for the organizations.

She supported a number of charitable organizations, including The Red Cross, American Cancer Society and American Heart Association, and was an Angel Tree Christmas shopper.

While in Jacksonville, Fla., Bonnie worked for Citizens Property Insurance in IT and was a student standardized test essay exam reviewer for the State of Florida’s Department of Education.

Bonnie was an avid reader and a traveler for both leisure and work, continuing her professional and educational goals. She was humble, rarely speaking of her many accomplishments. Bonnie embodied empathy, often helping those in need, and she loved being Nana.

She was preceded in death by her parents, Nelson H. Burke Sr. and Azella V. (Hutchens) Burke; all her siblings, Nelson H. Burke Jr., Herbert Burke, Janet Lee and Emmitt Burke; and her grandson, Gunnar Bracewell.

Memorial arrangements are not yet planned at this time and will be announced at a later date. Sympathies and correspondences may be sent to 6042 Springfield Xenia Road, Springfield, OH 45502.