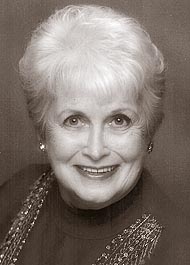 Meribel grew up in Springfield, Mo., where she met her husband, Opie Blanchard, an Air Force pilot. They married in January of 1946 and lived throughout the U.S. and abroad, settling in Connecticut in 1961.

Widowed in 1966 when her husband died in a tragic helicopter accident, she worked as a local newspaper columnist. She later moved to Maryland, where she owned two Paperback Booksmith stores. She was also secretary for Paint Branch Unitarian Church.

A frequent attender of the Writer’s Workshop, she loved to write, and had short stories and novels published. She wrote a newspaper column after moving to Florida in the 1990s, where she was active in the Unitarian Fellowship.

After a stroke in 2000, Meribel came to Yellow Springs to be close to her eldest daughter. She attended Yellow Springs Unitarian Universalist Fellowship, singing in the choir and making many friends. In 2013, she moved to Midland, Texas, to be near her youngest daughter.

Meribel was preceded in death by her parents, her husband, and two sisters. She is survived by daughters Dale “Annie” Blanchard and Linda Blanchard; grandchildren Kief Morris, Nick Haugh, Miri Bridges, Lucas Blanchard and Ted Bridges; and great grandchildren Cole Hamel, Erel Morris, Dylan and Annalee Haugh. An intelligent, talented and funny woman, she will be missed by many.

Plans are for her ashes to be interred near those of her father and grandparents in Summersville, Mo., sometime next year.

One Response to “Meribel Moberly Blanchard”